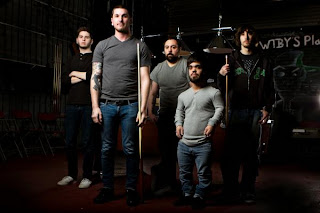 What's the meaning behind the band's name?
in 1911 my great grandfather lived there and grew up in auburn massachusetts he was a shoe shiner and would shine peoples shoes from dusk till tawn for a nickel a shine...Auburn was named after that.

What's the message to transmit with your music??
Always stay positive,Your not alone,Looking forward for days to come.

What's your method at the time of writting a song??
Vinnie and Johnny will bring guitar riffs they have written to practice we will all go over them together we then piece each of the songs together

Which is your music influences??
our influences are varied from heavy break down loaded bands to indie bands infused with upbeat tones.

What plans do you guys have for the future??
well as we speak we are recording our first full length that will hopefully be out either later this year or early next year. we really like what we are putting together. also we would love to do some tours as support for larger acts to push the new record.

Which has been the funniest prank you guys have been or took part while on tour or after a show?? um i think the best story isnt even a prank , on one of our tours its was a late night in PA and we made a stop for gas and a bathroom break . i was the last out of the van and was still asleep when everyone went in. so i went in a used the bathroom and came out a noticed the van was gone. i was left at the gas station alone and i left my phone in the van .ahah i was kinda lucky to have my wallet with me so i used it to call my phone like 1000 times from a pay phone. finally on like the 10000000 th try johnny answered my phone and they came back and got me....i thought i was done for but every thing worked out fine...oh yeah  and i remember saying as i entered the van "no one say a word" aha i was kinda ticked at the time but i think its hillarious now. - rocky

If you guys were stranded in the middle of nowhere after a show or while on tour. The help is 65 miles away from where you guys are, ¿Who would you guys send to look for help? And if while the rest wait, there's no food and the only way to feed yourself is by eating each other, ¿Who would you eat first? umm thats a really weird question but i guess ricky and brian would go for gas while i sacrificed myself for food since i have the most meat on my bones ahaha i would hope thy would find help ! -rocky

With which bands you guys would love to share stage??
um a short list?
Every time I die
BMTH
august burns red
maylene
hundredth
The ghost Inside
a plea for purging

Are you guys OK, with the direction the band is going actually?
yeah most definitely i mean at this point we like how the new records going and the new sound were going for! its gonna be a really diverse record drawing on heavy breakdowns and upbeat catchy singalongs.
Check out more: http://www.myspace.com/auburnmass
Publicado por Vents en 16:22