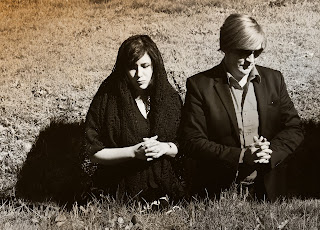 What's the meaning behind the band's name?
Honestly. we don't really discuss that, it tends to scare people away.  We however do offer prizes in our live shows for people who correctly guess the origins.
How did the band start??
Adela & Jude met in 2008 in L.A.
What's the message you guys want to transmit with your music??
It's a message of faith and believe in oneself.
What's your method at the time of writting a song??
Songs tend to spring from us almost fully formed.  Often we write a song when we are travelling to a show over hundreds of miles, and sometimes we put them away for a while, and let them sit until we are ready for them, or they are ready for us.
Who are your music influences??
Our influences are two-fold, first musical influences - musicians we respect, inspired by and emulate on some level. These would be musicians such as ; The Carter Family, The Handsome Family, Brother Claude Ely, Hiram Hank Williams, "X", Freakwater...  the list goes pretty deep. On our second level; we find old songs in Hymnals, some over 150 years old and we revive and re-interpert them into our own style.  Faith and belief is a large part of our inspiration, and we like  to say "We play songs about death to make you feel alive".
What plans do you guys have for the future??
We only a little over a year old as a duo, and we've achieved a lot in our first year,  the Club Passim IMF award was huge for us.  We have been expanding our live performances outside the Boston market, around New England, we are particulary fond of playing in NYC, and in 2011 we're putting together tours to the south, and eventually into a 2 -week  tour of Europe.
What has been the funniest prank you guys have been or took part while on tour or after a show??
Hmm.. We tend to remind everyone at our shows that everyone in the room will die... We like to be uplifting, and by reminding people that they will indeed die, that's it's important to live. right now.
If you guys were stranded in the middle of nowhere after a show or while on tour. The help is 65 miles away from where you guys are, ¿Who would you guys send to look for help? And if while the rest wait, there's no food and the only way to feed yourself is by eating each other, ¿Who would you eat first?
Since there is only two of us, we would probably go together, and if we got hungry - flag down some unsuspecting travelling wayfarer, and well.. you know...
What country you guys would love to play?
Countries we'd like to play.... My nephew's hardcore band just returned from a DIY tour of eastern europe that sounded pretty outstanding... We're working on a two week tour of europe to hit the UK, Ireland would be great and getting to cities around europe where our music would be well recieved. We also think the Southern US would be a great, foreign place to tour, and we are working on that.
With what bands you guys would love to share stage??
If we could, go back in time - We'd want to play with our heros.  The Carter Family, Hiram Hank Williams and Brother Claude Ely. In the modern world, The Handsome Family,  Chrissie Hynde's country outfit she's been touring with and Freakwater...
Are you guys OK, with the direction the band is going actually?
We are very excited about the future. Our entire outlook and vision really gets validated at each and every show. Our future looks very bright, and we have faith that we will be able to bring our music and art to wider and wider audiences.