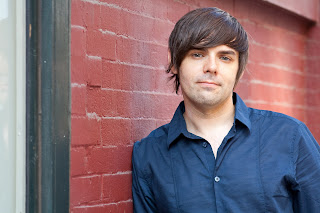 How did you get started with all this?
A highschool friend of mine kept bringing up that we should start a band and that he was surprised that I didn't play an instrument since
I liked music so much.  After I teaching myself how to play guitar, a few years later I was mugged and beat up by 5 guys in my neighborhood.  I had just started a new retail job and found myself not being able to keep up the regular hours do to headaches and a loss of sleep from the beating.  The same night I quit the job, unsure of what to do, I saw someone playing an instrument in the subway while heading home.  I thought to myself that I could do that, got home, grabbed my guitar, and heading right back out into the subway to play that very same night!

What's the message to transmit with your music?
I think that, like a lot of other musicians, my music is another way of communicating ideas and thoughts to people.  I recently read Mark Oliver Everet's (The Eels) book Things The Grandchildren Should Know, which is about his life and found myself relating to his reasoning for playing music.  He said he found himself always building things and coming up with elaborate little scenarios when he was a kid and when he got older, he found that when he channeled his unhappy times into songs that's when he was the most happiest.  I've found that when I've channeled my uneasy thoughts and feelings into song, that I've felt more balanced.  I've been accused of possibly being overly passionate and outgoing in my youth and music has given me something to put that energy to good use.

What's your method at the time of writting a song?
It really depends on the situation.  Normally I'll sit around and play around with different guitar chords and parts that I like the sound of, singing with them and putting lyrics to them over time.  Once and a while though, a tune or beat will just jump into my head and I'll roll with it, which wind up developing into full songs.  Are You Old At... is just one of those types of songs.

Who are your music influences?
The first pop tunes I learned to play were Beatle songs.  I listen to a lot of stuff and my tastes changes over time.  However, when I'm working on music there are a few artists and bands that pop into mind that I wondering what they would do or think at that moment.  Radiohead, David Bowie, U2, Wilco, Flaming Lips... I think the list may very well be too long to count though!

What plans do you guys have for the future?
To keep on making music of course!  I've been toying with the idea of a concept album that would basically be kind a collection of songs that represent my time since starting when I came to live in the city from a small hick town upstate to the experiences I've had playing in the subway, bars, and clubs and the times I've had.

What has been the greatest day as a musician?
The first time I was sitting in a bar with friends and someone leaned over to me as they were leaving, shook my hand, and told me that they were a big fan of mine.  My friends asked me who the person was and I answered with astonishment that it was a big fan?!

What are your hobbies
I'm a pretty big dork!  I'm an avid comic book reader and I love to play all types of different board games with friends!

Which country would you guys love to play?
Japan, because I've heard it just such a different culture over there from anything else!

With which bands would you guys love to share the stage?
I'm a big fan of the Killers who have a lot of tunes with great energy.  Also, The Eels who I just saw live and was impressed by their live show!

Are you guys happy with the direction the band is going?
My creative needs are being met and the doors of opportunity are being opened, so yes!