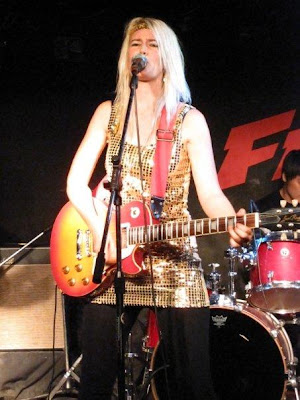 How did you get started with all this?? - I was backstage at a Bon Jovi concert in New Zealand and thought - this is the job for me! - so I made a plan, moved to Korea and started a band - been loving every moment of it ever since.
What's the message to transmit with your music?? - Do what you want to do and don't let anybody else tell you.  I'll all about 'If you think u can .. u can' Just do it.
What's your method at the time of writing a song?? - People watching! - I love it - i watch people, and write what i think they might be thinking - I love a catchy chorus - so I usually write that first - with my guitar by my side.
Who are your music influences?? Bon Jovi, Led Zep, U2, Beatles, No Doubt, Sheryl Crow, Blondie - Classic Rock and power chicks - I'd love great songs, harmonies, awesome instrumentals and last through the age of time.
What plans do you guys have for the future?? No. 1 Goal - to become an internationally successful Rock star that is known from New Zealand.  We have soo much talent here, but when i travel people only seem to know about Sheep and Lord of the Rings, they need to know about Jazzy J too!
What has been the greatest day in the band? Everyday is fun - but I think the highlight for us was playing at Korea's MUD Festival last year.  Awesome stage right on the beach testing wind conditions (we had to hold the mic stands with our feet) - then muddy madness afterward.  It was classic!
What has been the funniest prank you guys have been or took part while on tour or after a show?? There's always lots of pranks and joking around - we have this thing called the 'Karate badger chop' - if you ever see us walking to a gig - you'll see that we are jumping all around the road and laughing - you'll have to come to a show to see it in action ... Words can't explain its awesomeness.
If you guys were stranded in the middle of nowhere after a show or while on tour. The help is 65 miles away from where you guys are, ¿Who would you guys send to look for help? And if while the rest wait, there's no food and the only way to feed yourself is by eating each other, ¿Who would you eat first? The boys would send me - because I'm a girl - most likely to be picked up ... I don't know who they would eat? ... Depends if they have a big or small appetite ;)
What are your hobbies? I love to surf, Laugh, Play my guitar, Travel and sample as much of the worlds chocolate as possible..... Mmmm chocolate.
What country you guys would love to play? Everywhere! - I've traveled to so many countries now that I can't seem to stop - Asia is great - cause it's random ... Definitely Japan and South Korea ... And Europe has such good food! so -  France, England, Switzerland, Italy plus Australia, USA, Canada ... This travel bug fits in perfect with my music.
With what bands you guys would love to share stage?? Bon Jovi, Jet, Kings of Leon, Blondie, Matchbox 20, U2 - I love high energy bands that have fun on stage :)

Are you guys OK, with the direction the band is going so far? I'm a solo artist that works with a backing band, the guys are great - they change from time to time - but the great thing about being a solo artist is that I am responsible for everything that happens.  I found from other bands when you are equal - its easy for other member to slack off - this way I only have myself to blame.  I'm currently looking for a manager and want to tour Europe and hopefully the states next year.... Music music music = love
I like the direction I'm going - I can see the Rock stardom on the horizon ... Just a step at a time and I'll get there!