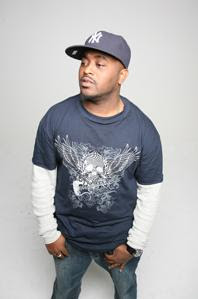 I guess you mean being affiliated with the Flipmode/PaperRock .....Well I was actually looking into moving out of Miami. Then I got a call that changed my life around.. My Cousin Budda called me asking me if I still had my studio equipment. I told him yes and then he told me that Spliff Star just moved to Miami and he's looking for a studio..I had just put together a mobile studio a few weeks prior so he  wouldn't have to go anywhere... I'l bring the studio to him. Then we spoke on the phone he asked a few questions then gave me the Ok to come to his Miami Condo. The next day I showed up and we started to record what is now his next official release "One Shot Willy Part 2". What's really funny though, is that Spliff didn't know I rap until 2 - 3 months later..lol...That's when we recorded " Wut R U Doin", my first feature on a  Spliff Star record. After that we recorded alot more Banga's!
What's the message to transmit with your music??
My music comes from my surroundings, what I see or have seen in my life, sometimes what I've lived through or lived with. I guess it would be transmitting a struggle, a painful struggle with moments of  joy & happiness. I have a song titled "Life without Hip Hop" the message there explains a little about my life and the part Hip Hop played in it to make you ask you ask your self what part it played in your life. I also have a song called "My Radio" the message in there is to believe in yourself and move forward. In both songs you can picture yourself and it will help u stay focused and charged up, ready to concur any obstacle. Every song transmits something different I can't call it.
What's your method at the time of writing a song??
There really isn't a method I stick to every time I write. Usually the beat influences me on the vibe I bring on a record. Sometimes my mood allows me to write without the beat, but usually when it comes to writing the beat talks to me and I just write down what it tells me!
Who are your music influences??
Bob Marley, Micheal Jackson, Red Hot Chilli Peppers, R.E.M....Poke (Trackmasters) He's my mentor...and my cousin..lol
What plans do you have for the future??
Right now, I'm starting up a tour and working on getting some shows overseas and in the US with my PaperRock Family.
What has been the funniest prank you guys have been or took part while on tour or after a show?
Haven't had that luxury just yet, really no time for games over here! I'm so focused! I go to perform and shut it down. After the show I'm working on my next career move whether it be a photo/video shoot, interview, or studio session. All the fun stuff happens on stage, I can't recall any pranks going on but alot of funny moments though....lol
If you guys were stranded in the middle of nowhere after a show or while on tour. The help is 65 miles away from where you guys are, ¿Who would you guys send to look for help? And if while the rest wait, there's no food and the only way to feed yourself is by eating each other, ¿Who would you eat first?
Lmao.. We would all take that mission together, taking turns carrying whatever it is we had to carry. We'd be armed with sling shots and razor sharp CD's before we started to look at each other as meals..lol..I heard insects have protein in them so we'd eat bugs, lizards,and birds.  Hopefully we'd be able to video tape the whole thing, so I can come out with a DVD entitled "Hip Hop Survivor"...
What country you guys would love to play?
Spain!!!

With what bands you guys would love to share stage??
Snoop Dogg,Wiz Khalifa, Jay Z, Busta Rhymes & Spliff Star!
Are you OK, with the direction the band is going actually?
It's all good right now,but I'm about to turn it up a few notches!
Any Closing Words?
Yeah!
Vents thanks for the interview & Everybody click my link on this page and check me out!
@itsFevah < ~~ Follow me on Twitter!