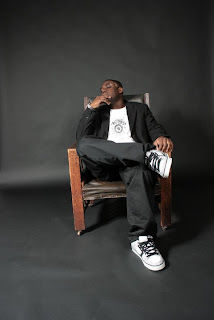 What's the meaning behind your name?
My name is a result of my old man being a famous Caribbean singer.  His name was Blue Boy when he started out, and then after a few consecutive hits the fans started calling him Super Blue.  People who knew I was his son used to call me "Little Boy Blue", "Super Blue Junior" and any other clever name they could come up with associated with that.  Blu Lyon is just the one that stuck.  “Lyons” is my actual last name.

How did you get started with all this??
I started out by teaching myself how to make music using a program called "Fruity Loops". Then I made tapes, gave them out, met other kids who were also into music and wanted to do more after getting good reviews from them.  I loved doing it and could not stop.
What's the message to transmit with your music??
I am just translating my life experiences and thoughts into a musical form.  There is no specific message I’m trying to get to people.  I would only hope that people can listen to my work and see that real creativity is not dead.

What's your method at the time of writing a song??
There is no real method to my writing process.  Sometimes I do not even write lyrics, I just record things as they come to me.  My ideas come at anytime or place while I am doing any number of things.

Which is your music influences??
I listen to anything that sonically and creatively sounds good.  I am not biased to any specific genre of music.  Different musicians/artist influence or inspires me for different reasons.  Some do it with their musical creativity, others with their work ethic, etc.  I’m very much into Bounty Killer, Mavado, Vybz kartel, Linkin Park, Lil Wayne, 50 Cent, Dr. Dre, Eminem, Charlotte Church, Hayley Westerna & Kanye West.  These are the ones I am listening to and watching frequently right now.
What plans do you guys have for the future??
I'm working to release my mixtape, "Super Blue's Bastard Son" early January 2011 and do some touring to promote it.  I am also planning on becoming heavily involved with sound design and scoring for television and movies.  Right now I'm doing the music for a new reality show called "Work It Out" which should hopefully be picked up by a network in the near future.
Which has been the funniest prank you guys have been or took part while on tour or after a show??I did a show in Atlantic City once and after the show we got together with some girls, drank, and partied hard.  My high school buddy Avarice got drunk out of his mind in the hotel room and passed out; he was sound asleep.  He is the type of guy that is always talking about the high class of women he dates, so we all got the bright idea to get an extremely ugly girl to be in bed with him when he gets up.  We went out found a “working” girl that wasn’t very attractive and a bit heavy, striped him naked and let her sleep in the bed with him.  No one slept that whole night cause we didn’t want to miss his reaction and it was very well worth it when he got up and saw her naked in bed with him.  The joke lasted about 10 minutes then we told him.  She was a good sport about it but he was angry the rest of the trip.

If you guys were stranded in the middle of nowhere after a show or while on tour. The help is 65 miles away from where you guys are, ¿Who would you guys send to look for help? And if while the rest wait, there's no food and the only way to feed yourself is by eating each other, ¿Who would you eat first? I would send my homeboy Tarique to go get the help and we would probably eat my artist Jimmy Hayze first.  He is pretty big, we could last a while on his fat.  Probably won’t have to eat anyone else after him.

What country you guys would love to play?  I want to perform in New Zealand.  I’m a big fan of Lord Of The Rings and would love to visit the places that it was filmed while there.

With what bands you guys would love to share stage??
It would be great to perform with Kanye West.  The thought and creativity he puts into his stage sets and performance impresses me.  I love that he experiments with different genres and that he is someone who is passionate about the total art of music; the creation of music and the delivery of it to an audience.  I believe that I am passionate about it in that same way so it would be a pleasure to share a stage with him at his best.

Are you OK, with the direction your career is going actually? I am satisfied with the my musical and career direction just not happy with the speed at which its moving.  Sometimes there is not enough time or help to get everything done, so some opportunities cannot be taken or pursued.  Its a hardship but hopefully it will get better soon.