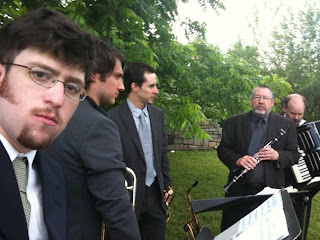 What's the meaning behind the band's name?
Afro-Klezmer is a genre we are inventing that combines musical influences from many parts of African musical styles with Klezmer music. We started in the historic Old 4th Ward of Atlanta….and its called an orchestra because there’s a bunch of us.

How the band started??
The band started with a conversation Roger Ruzow (Me) had with Colin Bragg (4th Ward A.K.O. guitarist) about an idea for a group that would integrate Afro-pop styles with Eastern European melodies and song styles. I went home and wrote  3 or 4 tunes, then went asking a few great musician friends of mine what they thought about such an "Afro-Klezmer" group. They dug it and said they would be interested in playing in this type of band so, I started scheduling rehearsals and writing more tunes.

What's the message to transmit with your music??
There is a relationship between the Jewish and Gypsy music of Eastern Europe and music that comes from various parts of Africa. That’s the short version the longer version may be found in our music on our disc East Atlanta Passover Stomp…

What's your method at the time of writing a song??
I’ll have an idea. Sometimes it will start with a melody, sometimes I will sketch the form of the tune and then compose a melody or start writing chord changes, sometimes the group will collaborate on a song or parts of a song and then reshape an idea into something large.
Which is your music influences??
We listen to all types of music, Charles Mingus is a big influence on our music also Fela and Frank Zappa. In no particular order we dig Charles Ives, John Coltrane, Duke Ellington, Cannonball Adderley, Black Sabbath, Sex Pistols, Pavement, Celia Cruz, Meters, Ken Vandermark, William Parker, John Zorn, Abe Schwartz, Benny Goodman, and hundreds of other great artists also we dig the guys just up the street in Little 5 Points playing old school New Orleans brass band music.
What plans do you guys have for the future??
Playing more music, recording good music, composing good music and enjoying ourselves.

Which has been the funniest prank you guys have been or took part while on tour or after a show??  Jeff Crompton told a bunch of trombone player jokes and we laughed and laughed.
If you guys were stranded in the middle of nowhere after a show or while on tour. The help is 65 miles away from where you guys are, ¿Who would you guys send to look for help? And if while the rest wait, there's no food and the only way to feed yourself is by eating each other, ¿Who would you eat first?
Well, none of us keeps kosher so that’s a tough question.
Which country you guys would love to play?
Spain, Germany, Poland, New Zealand, England, and most places…Is Ingrid Bergman circa 1947 a country?

With which bands you guys would love to share stage??  We like to share a show  with any good group who fairly shares the backstage beer cooler, if they help get a good draw, so much the better…also we want to do a gig with the Immigrant Suns from Detroit, Michigan

Are you guys OK, with the direction the band is going actually? Yes we are ok..in fact this weekend we’re heading in the direction of north to play music for many folks who have never heard us!!