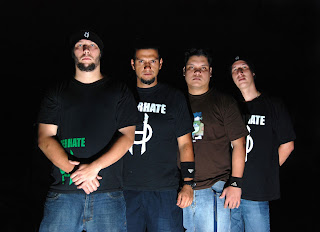 What's the meaning behind your name?
Giancarlo: OVERHATE is a banner that represents in a perfect form what our music is (instrumentally speaking). We needed to make up a name for ourselves that once you hear it; you may know for sure what kind of music you are going to be presented with. We wanted, once when we started writing the first record, to enclose a lot of elements in our music, where aggressiveness, power, emotion, melody and such where on the list. With this name we sort of achieve it, not to mention is a name we are all comfortable with, and it`s easy to remember! It sort of sticks with you.
Joseph: OVERHATE for me is a conceptual word, it`s meaning encloses all the feelings of the human race, which could be of hate, love, joy, happiness, or anything, but also we are not going to put OVERLOVE to a thrash metal band. Right?
Erick: OVERHATE is the cohesion of forces transmitted by each of the band members that unite to create feelings, and to transform those feelings in music. That`s what OVERHATE means to me.

How did you started with all this??
OVERHATE: The band rose from the ashes of a Caracas based band called Mermelada Maker, where Erick and Joseph where in, along with Jose Lara (former guitarist, who decided to settle down and left the band), and a couple of others musicians which existed for quite a few years. Then the eagerness of making a more advanced music was the gasoline moving the machine, and by November of 2003 Giancarlo came into picture when he quitted his prior band, Eyestrange. Now as a quartet and sharing the same vision the band started writing music adding all the compounds it needed like progressivity, Melody, Metal, Jazz, Etc, and the only task left was to choose a good name. After a lot of talking, the name “OVERHATE” came into picture.

What's the message to transmit with your music??
Giancarlo: Lyrically, you will find many things to give interpretation to. The Themes on the lyrics deal with society, freedom, justice, spiritual matters, hate, love, the good, the bad, and evil (Lol) Righteous things, wrong things, etc. and even there is one song dedicated to the “book of the way” (the tao te ching). Having said that, listening to our music to get a message is as when you listen to someone, you hear the tale, and then you always get a message from it, you may also even learn from it, if you take the lyric to a personal level. Musically, well: OVERHATE!
Joseph: Most of OVERHATE`s lyrics are of personal experiences and issues, and some lyrics talks about conceptual freaking stuff ha ha!, and other talks about things that brake our balls about the current political, religious, holy wars, conflicts situations. I guess you can get the message in each case!
Humberto: POWER!!!!!
Erick: OVERHATE`s goal is to transmit the reality of our lives in a transparent way, so that it gets the listener to take his own insights.

What's your method at the time of writing a song??
OVERHATE: we arrive to the studio with a shitload of ideas that we develop there. Actually it takes a while. We try to work on many riffs an ideas on every song, so that we can come up with a product that suits ourselves, and when everybody`s happy, we know the rest of the world will be happy with it too.
Giancarlo: Lyrically speaking, I always come up with titles for the songs and write a principal idea to them, so I can always resemble to what the song original idea is about. This is good because when we write the music in the studio I always get feelings from the songs that motivate me to write the lyrics to them. Once the idea is clear, I can essay on it, and that gives birth to the lyric`s body, mostly ending in definitive lyrics, unless of course I have to arrange or change things here and there. That`s quite a process I enjoy, to be honest.

What plans do you guys have for the future??
OVERHATE: We are about to release our second album, called “Relentless is our Strength”. We will be filming a video of the song “No Change Today” off of “Relentlss” and are doing a sort of home video, that includes the recording of the new album and a bunch of other things. With that, we will tour India/Dubai this November – December and hopefully the United States next year! We are quite busy now, for sure, but it will be all for good, and for the pursuit of making this happen.

Which has been the funniest prank you guys have been or took part while on tour or after a show??
Joseph: There is a funny moment the night we played a show in the city of Maturin in 2007. After the show, Giancarlo really smelled like stuffed meat, so we had to kick him out bed and throw him in the bathroom, I remember Jose Lara screaming “Take a shower or you aren’t sleeping here! Lmao.
Humberto: This year when we played Ciudad Bolivar i incidentally went to the women`s bathroom and it was loaded!!! That was quite a shame the boys Heard the girls screaming out there. Afterwards it was all quite funny, everyone seemed to enjoy it.
Giancarlo: the funniest moment, yet tense, was when we toured the city of Cali, Colombia. Erick and I had drank all the Colombian brands of beers and wine we could lay our hands upon, which resulted in Erick puking the entrance to Cali`s International airport!!!! That was in front of a bunch of guards, but it is funny to still have a photo of that! Lol.
Erick: Once the bus where we traveled got wrecked in the middle of nowhere in the state of Miranda, in the middle of the night, and Humberto started to entertain people with the music in his cellphone, when we heard some girl`s voice saying “I know from where that music comes from, it`s those four guys that look like a band that are so tall and rambunctious” afterward her sister said “listen to you bitch!, did you just scanned those four” The whole bus started laughing after that… we were quite ashamed afterwards! Lol.

If you guys were stranded in the middle of nowhere after a show or while on tour. The help is 65 miles away from where you guys are, ¿Who would you guys send to look for help? And if while the rest wait, there's no food and the only way to feed yourself is by eating each other, ¿Who would you eat first?
Humberto: We would eat the fatter one at the moment!, well I guess we`ll die starving waiting for help, I won`t eat any of those three!
Erick: OVERHATE would send the one that`s the fittest lol, well now that I think it we can send Joseph, because he`s the one that complaints the most and foresees the future, you know, the prophet of disaster! Haha! If we send Humberto, he`d probably get lost or fall asleep where ever and he would get eat it by lions or ants. As for eating my band mates, I pass. I would prefer to give my life for any of them before starting practicing cannibalism!
Giancarlo: I`d say we would do something like, leaving one behind in the bus (that would be Humberto, so he can sleep lol) and the rest of us would go in different directions to get the help quicker. I also pass in eating any of my band mates, because our diets really don’t make us the healthier or the tastier skin to eat! Lol!

With which bands you would love to share stage??
OVERHATE: Slayer, Megadeth, Exodus, Kreator, Metallica, moonspell, slipknot, sepultura, in flames, Testament, Sacred Reich, Anthrax, for being the bands we grew listening to. Actually we had shared the stage with many bands, so anyone that helps into getting a good vibe for a show is the right band to play with!

Are you OK, with the direction the band is going actually?
Joseph: Totally, is what I have ever dreamed of… top lay in a band that fusions progressivity and thrash metal with three awesome musicians and friends!
Humberto: Really happy with the direction the band is heading; which is north!
Erick: As for now, OVERHATE has fulfilled the goals that has planned, thanks to the effort, endurance, humility and simpleness… so OVERHATE`s music will carry on to keep pleasing crowds in a positive manner.
Giancarlo: Definitely! The constance is slowly paying off we believe. We will continue till the end, because as you all metal heads know, we will thrash till death!