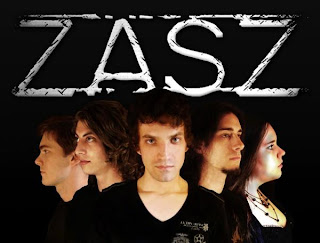 What's the meaning behind the band's name?
In all honesty there really isn’t one other then it just popped into my head one day while I was driving in Pennsylvania. I then decided that was what I was going to name my next project. Sure enough, here we are.

How did you guys began with this band??
The band really has its roots in Philadelphia, PA. I started writing music on my computer and my friends all told me I should have a band play it. So I hooked up with Dan the piano player, and after playing a bunch in Philly we moved to Nashville and settled on our current lineup. Its pretty neat for us to see how what started as computer music in my little apartment in PA now has become a touring, recording, gigging progressive rock band with members from all over. We've got people from not only Philadelphia, but also Ohio, Tennessee and Louisiana, so we're pretty diverse as far as where we're from.

What's message do you guys want to transmit with your music??
Well, our current record “Destiny Beside the Great Divide” is based around the title song which is, in a nutshell, about a warrior of almost infinite lifespan who meets and falls in love with an angel who transforms him from a killer to a healer. She then charges him with the task of beautifying the universe, leading into our next album “The Interstellar Healer”. These two, plus the next to albums thereafter form a four part series. The main themes are redemption, healing, and making the world beautiful. So in some ways we’re trying to be a force for real, usable positivity through music. Other than that, we're trying to play our music that we love and believe in, so the music is a message in and of itself.


What's the usual method at the time of writing a song??
For the most part, I write the music on the computer using a brand of looping software. Once the initial version of the song is created, complete with lyrics, strings, guitar, keyboard etc., I send it to my music notation software which writes it into sheet music or tabs. Then those get sent to the other members and they get the initial parts down, then begin making them awesome and ready to be played live and recorded.

Which are your music influences??
In terms of sound, the big three are Radiohead, The Mars Volta and David Bowie. In terms of method, I’m a really big fan of guys like Frank Zappa and Miles Davis, who had a vision and brought it to life through collaborations with the best players around. Certainly worth mentioning are Muse, Steely Dan, Pink Floyd, Deftones, Jeff Buckley and Led Zeppelin. We generally draw from jazz based progressive rock, classic and psychedelic rock and electronic music.

What plans do you guys have for the future??
Well we just finished Destiny Beside the Great Divide, so we’re working on getting that into people’s ears. We’re simultaneously working on the next album as well. Our current album is part of a four part concept series, where the title track is part of a story. We’ve got one down, three more to go. Other than that, lots and lots of shows all over the country, and we hope to make our way towards the UK too.

(Random Question) Which has been the funniest prank you guys have been or took part while on tour or after a show??
Actually it was a prank played on us. One time, when we played in Charleston, SC at The Oasis, a group of girls had come to the show and apparently liked us. So much so in fact that when we walked outside into the 25 degree weather, our van was completely covered in women’s underwear. There is still a sock from that tied around our right rearview mirror, and I don’t think its going anywhere anytime soon.

(Random Question) If you guys were stranded in the middle of nowhere after a show or while on tour. The help is 65 miles away from where you guys are, ¿Who would you guys send to look for help? And if while the rest wait, there's no food and the only way to feed yourself is by eating each other, ¿Who would you eat first?
Haha that’s one of my favorite questions I’ve ever been asked. Well, here was the band’s consensus:
We would send Amanda and Tim to go look for help, as Tim is generally the navigator and Amanda is the chick/bodyguard. This would leave Sean, Dan and Word. They decided that they would eat Dan’s legs, Word’s foot and Sean’s face simultaneously, because if Tim and Amanda get back and anybody is missing anything they need to play, everybody is going to die anyway.

With which bands you guys would love to share stage??
Oh man. We’ve had dreams about opening for Muse or The Mars Volta. But I would have to say Radiohead would be the one. Such a prolific career. Thom Yorke is a musical genius. I think I’d forget my lyrics. But besides that, any that are awesome and play well.

Are you guys OK, with the direction the band is going actually?
In most respects yes. Musically absolutely. The lineup we have is killer. These are some of the best young musicians in Nashville. We’re working on stuff that is so detail oriented and fine tuned that though it will be a challenge to produce, it will doubtless be rewarding. Business wise, it is slow going, but any successful music career is. As long as everywhere we go there are some people who get on board with what we’re doing I’m content. I hope to find a manager to work with soon so that I can focus my energies on the next album, which will require a lot of musical attention.