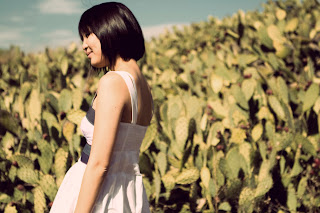 How the did started with all this??

Probably at age 6 when Lion King first came out with some catchy new songs.  I could never get enough of those Disney tunes and that's probably when singing became apart of my life.
On a more serious note, after years of just singing and writing songs in dark and dust, I decided to "go for it" after graduating from college.  Being an business econ major just wasn't doing it for me and I got the sudden confidence that I was more satisfied making songs than anything else. So I applied to school to really learn about the industry and got friends who could help me out instrumentally.  Now, I am loving what I do: which is making music and sharing it with anyone willing to listen.

What's the message to transmit with your music??
I want to give people a reflection of this world from a different angle; you know, show people the glass is always half full, not empty.  It's a terrible to thing to discourage others, but to discourage them with music? That's just terrible.  I want to give people the outlook that some things are just beyond us and sometimes you just have to let go and let time take place.  In the mean time, enjoy the ride.
What's your method at the time of writing a song??
Reality.  Whether it's in the tranquility of a countryside park or on a bench in the rush of a busy city, I need to be able to see things and people, more often than not.  When I have settled down to a clear view of the world in front of me, I can mix it with my perspective and hopefully create a good song.  Hot tea, books, and other music always help inspire.

Which is your music influences??
Definately Miss Jones.  That's Norah Jones, I mean.  I love singer-songwriters who can bring a twist to both their music and lyrics.  There are many more singer/songwriters I listen and I try to find my center and my spot between them.

What plans do you have for the future??
As of now, I am using my music to encourage people abroad.  I am actually in Paraguay as of the moment and it's always a wonderful experience to be able to connect with music when language becomes a barrier.  When I get back, I hope to start touring again and sharing that same musical connection with anyone who cares enough to listen.  It'd be nice to go abroad again as well, but my area kind of comes first.
Which has been the funniest prank you have been or took part while on tour or after a show??
Although I have yet to experience some pranks, my first show in LA got me some laughs when my bassist forgot his bass.  After running late on schedule, we were already racing through the emergency lane to get to my opener spot at Genghis Cohen.  It killed me when my bassist told me, "I think I forgot my bass", ten minutes away from the venue.  That was probably my opening statement for my first gig.

If you were stranded in the middle of nowhere after a show or while on tour. The help is 65 miles away from where you and your band (If any) are, ¿Who would you send to look for help? And if while the rest wait, there's no food and the only way to feed yourself is by eating each other, ¿Who would you eat first?
Because I'm solo artist, I guess I'd be the one to start walking.  I don't think I could ever eat myself, although I've been a nail-biter since birth.

Which country you would love to play?
Italy.... and not just Italy, but in Rome.  With the city so beautiful, I think street gigs would be a more awesome venue than anywhere else.  Maybe the center of the Colosseum?

With which bands you would love to share stage??
Since she is one my biggest influences, Norah? Brooke Fraser would be pretty awesome too; I love Australian singers.

Are you OK, with the direction the band is going actually?
As of now, I like my direction.  I defiantly feel like I'm being led rather than forcing or worrying about where I'm going.  Being able to perform in itself is a blessing and having people to support and listen is just a cherry on top.
Check out more: http://www.myspace.com/hanakimmusic
Publicado por Vents en 8:04