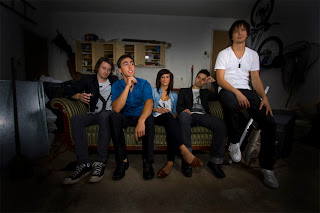 What's the meaning behind the band's name?
It's kind of a play on the old saying "Keeping up with the Joneses" How todays society is overly concered with trying to outdo their neighbor or friends in material things.

How the band started??
It was originally formed when brothers Nick and Adam tried to start separate bands but couldn't find anyone else in the local music scene that had the same ideas and goals. So they thought, why don't collaborate and form one band?

What's the message to transmit with your music??
A lot of our songs are about heartbreak or being in a terrible relationship, something that we're all too familiar with. What we try to do in these songs though is have a positive spin as well, like it's good you're alone now because that relationship was killing you! We think a lot of people can relate and hopefully get some kind of hope that they're not the only ones feeling that way.

What's your method at the time of writing a song??
We usually start with a riff or a simple chord progression, then jam it out and try to find a chorus that works. Then Adam will start layering guitars, catchy hooks, and little lead bits. Nick writes a lot of the lyrics and will usually take home a quick recording of our jam where he'll jot rough sketches of melodies and ideas for lyrics. After that it can take anywhere from a couple of weeks to a couple of months before we have a fully formed song that we are really happy with. That usualy doesnt last though because we are always changing and adding little things. We are always looking to improve!

Which are your music influences??
We all have very different influences that started our musical paths, but as a group we are really drawn to bands such as Third Eye Blind, Goo Goo Dolls, Coldplay, Barenaked Ladies, The Killers, John Mayer and a lot of 90's music.

What plans do you guys have for the future??
We are currently working on our first full length album, which we are really excited for as we will be recording in Hollywood, California with producer Tom Chandler. Thats the biggest event on our agenda right now. After the album is complete we plan to release it at our CD release party, and shortly after head out on tour.

Which has been the funniest prank you guys have been or took part while on tour or after a show??
Haha I'm not going to mention any pranks here, especially not the one that backfired but I can say that while on our Eastern Canadian Tour Adam found out quickly that Dwayne snores. Let's just say that Adam didn't sleep very well and that we're lucky to have returned home with a bass player.

If you guys were stranded in the middle of nowhere after a show or while on tour. The help is 65 miles away from where you guys are, ¿Who would you guys send to look for help? And if while the rest wait, there's no food and the only way to feed yourself is by eating each other, ¿Who would you eat first?
Well we all got together and figured this one out. Dwayne would get sent to look for help because he's the most physically fit and would probably be the most responsable. Adam would just get lost, Nick would probably forget about sending back help, as for Blair and Dani they probably wouln't make the hike. When it came time to start eating, Blair lost out, being a drummer means your have a bit more meat on your bones.

Which country you guys would love to play?
Japan! We have some pretty big nerds in the band who love Anime, Godzilla, and cyber punk. Plus, who can resist sushi! The fans over their seem to go crazy for their favorite bands, and we like the idea of being chased down airports and streets haha!

With which bands you guys would love to share stage?
Well, I know Adam would LOVE to go on tour with Third Eye Blind! Coldplay would be another band we would love to play with, and if someone could every get Liam and Noel back in a room together Oasis would probably be on the top of our list.

Are you guys OK, with the direction the band is going actually?
Absolutely, we have a great idea where we want to go with our sound on this next album, as well as a plan for growing our fan base and getting our name out their. We just have to stick to our game plan and hopefully it all works out for the best!
Check out more: www.chasingjones.com
Publicado por Vents en 7:37