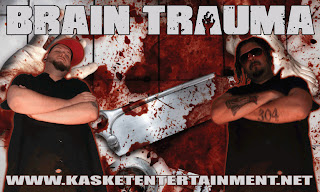 What's the meaning behind the band's name?
The name Brain Trauma really has no hidden meaning behind it. Its just a name. We could probably come up with some bullshit about how it represents the pain and anger that we suffer from in modern society, but it has nothing to do with anything like that.

How the band started??
Way back in 2003, I (Kasket Kyle) was asked to perform my first show ever at an all ages venue in South Charleston WV. I asked fellow rapper Toxik Flow if he would provide "hype man" duties for the show. Following the event, all hip hop was banned from the venue for the remainder of the time that it was open, and shortly after Brain Trauma was formed and we began working on our first album.

What's your method at the time of writting a song??
Generally we will get an instrumental track first. Either we will put one together, or we will buy one from someone. After that we will get together and start writing a chorus or a verse. And after we get one of those done, we go from there.

What plans do you guys have for the future??
Shows, tours, music videos, a new full length album, new merch, all kinds of cool shit.

Which has been the funniest prank you guys have been or took part while on tour or after a show??
It wasn't really a prank, but during our Halloween show last year we were having a costume contest. Some guy was dressed like a woman, and Toxik kept calling him things you would normally call a girl. After the crowd voted for someone else to win, the tranny got pissed and threw a pitcher of beer on Toxik and our DJ. They chased the guy out in to the street and a small altercation went down.

If you guys were stranded in the middle of nowhere after a show or while on tour. The help is 65 miles away from where you guys are, ¿Who would you guys send to look for help? And if while the rest wait, there's no food and the only way to feed yourself is by eating each other, ¿Who would you eat first?
We would both go out looking for help, and since we are both a couple of hillbillies at heart, we would kill and eat small woodland critters on the way.

With which bands you guys would love to share stage??
Would love to jump on stage with someone like E-Town Concrete, Hollywood Undead, The Bloodhound Gang, ONYX, Insane Clown Posse, Hatebreed, Rehab, or Bodycount.

Are you guys OK, with the direction the band is going actually?
Were fine with it as long as it leads us to a good time.