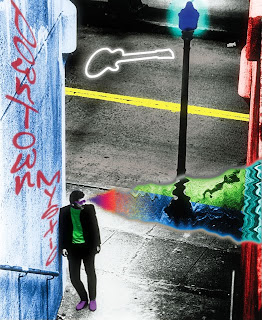 What's the meaning behind the band's name?
After recording a bunch of tracks, I was looking for a name to call the project. I knew I wanted something that could work as a Band name but I also wanted something that would have some personal meaning for me. I was driving up to Providence, RI and saw a sign that said “Next stop-Downtown Mystic” and immediately knew that was the name. It was perfect—“DownTown” has a rock feel to it and “Mystic” refers to myself since I’m also a Numerologist and have a good working knowledge of Astrology, Tarot, I Ching, etc.

How the band started??
It started as sort of a hobby. I was working in the studio with some really good musicians on their projects and thought I'd get them to play on some of my songs. My plan was to work on the tracks when I had some spare time. That was the start and eventually I went back and worked on the songs. After I decided on the name DownTown Mystic, I put a track on a Radio Industry compilation CD, which would get played by Jed The Fish on KROQ in LA...and then DownTown Mystic really became a reality.

What's the message to transmit with your music??
There’s an emotional vibe to all the songs because the one thing that all humans share is emotions...and that’s what makes music so unique...it connects instantly with people’s emotions. I like to think that I try to transmit Truth in emotions. I want to convey an honest emotion that’s heartfelt, be it sadness or joy, and not by artificial means via songcraft, production, etc.
What's your method at the time of writing a song??
Spontaneity is my method of choice. I sit with a guitar and just let things come to me. Once something shows up, then the real work begins. I get a melody together and then I generally put it down on tape so I won’t forget the inspiration. Things have a way of changing from the time you get an idea to the time you come back and try to remember the idea...LOL...so if something really hits me, I get it on tape. Then I try to flesh out an arrangement and eventually write the lyrics, but that usually requires another inspiration for me to write the lyrics....LOL...but as a rule, once I have the verse and chorus down, I can generally hear the finished recording of the song in my head...just not the lyrics...LOL
Which is your music influences??
The new cd, “Standing Still” is what they call Americana, which to me is Roots/Rock’n’Roll. My influences are mostly back in the 60s with The Beatles, Stones, Byrds, Buffalo Springfield, Poco, Creedence, etc. If you listen to those bands, then you’ll hear their influences like Chuck Berry, Buddy Holly, Elvis, and even Dylan.
What plans do you guys have for the future??
What else...touring and recording.

Which has been the funniest prank you guys have been or took part while on tour or after a show??
The mayhem usually occurs in the studio because where we record was once a Rock Club, and is now a GoGo Bar on one side and the recording studio on the other side. So the guys will go over to the bar on breaks and hang out with the girls. Eventually they talk a few girls to come over to the studio when they finish dancing. One memorable time, involved a Xerox machine and various body parts of the girls and you know...band “members” ;-)

If you guys were stranded in the middle of nowhere after a show or while on tour. The help is 65 miles away from where you guys are, ¿Who would you guys send to look for help? And if while the rest wait, there's no food and the only way to feed yourself is by eating each other, ¿Who would you eat first?
The drummer...always eat the drummer because they have good drumsticks...(groan)

Which country you guys would love to play?
I really want to play in Europe, particularly France, Germany, The Netherlands, Belgium, Italy and of course the UK. “Standing Still” made the Top 25 Euro/Americana Chart and that means they really dig the music there. They love American Rock’n’Roll!
With which bands you guys would love to share stage??I would love to play with The Band of Heathens, out of Austin, Texas...our new fave band.
Are you guys OK, with the direction the band is going actually?
Couldn’t be happier!