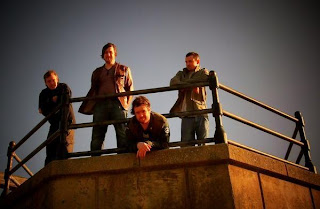 What's the meaning behind the band's name?
The name comes from the bad guy in a super mario game and is also the surnames of the drummer and singer.

How the band started??
We started as the band matt and jamie were in disbanded they were looking to start a new one, i had played in a few bands with matt years ago and jamie had an old friend he knew Duanne that could play lead.

What's the message to transmit with your music??
Generally we just want to write good original songs and steer well away from all the cover nonsense that seems to be out now.

What's your method at the time of writting a song??
When we write songs one of us will have an idea that he brings to practice and then we all add our own ideas and the song becomes a Kingfin song.

Which is your music influences??
We have many influences The Clash, Nirvava, The Ramones, Oasis, Libertines, Muse, Radiohead, Pink Floyd, The Who etc etc etc.

If you guys were stranded in the middle of nowhere after a show or while on tour. The help is 65 miles away from where you guys are, ¿Who would you guys send to look for help? And if while the rest wait, there's no food and the only way to feed yourself is by eating each other, ¿Who would you eat first?
Ha, we'd prob send jamie for help as he's more sensible, I' d have no idea who would get eaten hopefully not me!

Which country you guys would love to play?
We love playing in England but would play anywhere we could, America and Canada come to mind.

Are you guys OK, with the direction the band is going actually?
Yes, everything is going good in the Kingfin camp!