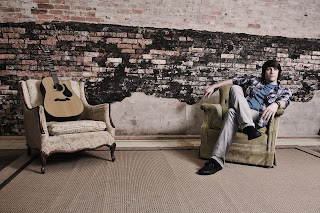 How did you get started with all this??
I grew up with music.  From the very beginning I was always surrounded by music and singing.  I picked up guitar in middle school and taught myself the basics.  I fell in love with it and throughout high school took lessons from a good friend and played in a few bands for a while.  Eventually the collective interest of the groups fizzled out which left me with the free time, energy, and creativity to begin focusing on songwriting.  From there I just started writing and going out and gigging, trying to get in front of as many people as I could.  I had a handful of songs I was proud of and decided I should go ahead and cut a record.  And the rest is history...

What's the message to transmit with your music?? When I'm writing I'm not really setting out to convey any certain message.  For me, songwriting's about trying to accurately capture a concept or a feeling and translate that emotion into a song that people can relate to.  Looking at my current catalog though, I'd have to say the underlying theme in everything is love.
What's your method at the time of writing a song?? Songs come to me in fragments - sometimes it's could just be a melody and other times it may be lyrics.  I keep a journal or recordings of these ideas and usually they'll come together and form a song when the time is right.
What are your music influences?? I'm a fan of just about every single genre of music but I'd have to say the artists that have been the most influential to me are John Mayer, Lifehouse, Brad Paisley...and of course Rick Astley.  : )
What plans do you have for the future?? Making good music for people.  That's what I plan on doing for the rest of life.  But that's a long-term answer.  Right now, I'm planning on recording a new EP in a few months and setting up a tour for 2011.
Which has been the funniest prank you have been or took part while on tour or after a show?? Unfortunately I'm not much of a prankster so I don't really have a good response.  The band and I always have a good time, just not usually at one another's expense.
If you were stranded in the middle of nowhere after a show or while on tour. The help is 65 miles away from where you and your band (If any) are, ¿Who would you send to look for help? And if while the rest wait, there's no food and the only way to feed yourself is by eating each other, ¿Who would you eat first? Hmmm...I'm pretty sure I'd send my keyboardist Matt, cause he'd be awesome at survivor man stuff like that.  I'd feel like the chances of us being found would be pretty good if he went.  And for the second question....gross, that would never happen.
Which country you would love to play? I'm really looking forward to playing Japan, I think that will be incredible.
With which bands you would love to share stage?? Lifehouse, David Ryan Harris, Corey Smith, Jonny Lang.

Are you OK, with the direction the band is going actually?  I am pleased with the way things are going right now.  Everything happens in due time so I'm just soaking up all the good things I can right now.  I'm optimistic to experience what the future has in store.
Check out more: http://www.myspace.com/daviddisharoon
Publicado por Vents en 13:48