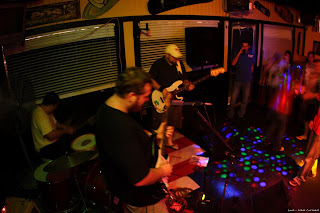 What's the meaning behind the band's name?
JW- There’s not really a whole lot of meaning there.  It actually came from an image I’ve had in my head since I was a little kid.  My older brother, who was a big inspiration musically, had a guitar case with a Musicman sticker stuck on it and the “Mu” was ripped off so it just said “sicman”.  Coincidentally, there is also a scene in the Bruce Lee movie titled Chinese Connection (the English dubbed version) where the ambassador of the Japanese dojo shows up at Bruce Lee’s place with a sign that reads: “sicman of Asia”. This is in reference to them being Chinese and being outcasts of the Asian community (according to the movie).  That’s kind of why we added the “of VA” part of the name because we too feel like outcasts of our own musical community (cue depressing violin music).  We just thought there would be virtually no chance of someone else having that ridiculous name.  I am amazed at how many local bands across the U.S. actually share their names with hundreds of other bands.  I like the fact that if you google SICMaN of VA we are the only thing that comes up.  And that’s right I just said we google ourselves…haha.  We also have hopes of franchising it out eventually.  We want to be the first band that is also a chain restaurant, so there could be SICMaN of MA, SICMaN of CA….etc.  We’re all about the music.

How did the band start??
JW- Matt and I met about 19 years ago when we were 12 or 13 years old.  Matt played guitar and was a completely competent blues guitarist.  I was pretty much just a hack at playing drums.  In high school we began playing Jimi Hendrix and SRV covers at local blues jams to hone our skills.  In the early years we played around town with different people and went through many different musical phases.  It wasn’t until about 9 years ago we permanently dubbed ourselves SICMaN of VA after trying out many different bands under even worse names before we settled on that little gem.  And besides we had already invested a small chunk of change on our 2003 debut album titled “a sicman’s guide to illness…” (available on itunes) so there was no turning back after copyrighting and publishing under our new identity.  In 2009, by the grace of God, we met our intellectual counterpart, bass player, soul mate, and sexual dynamo John Litz aka “Johnny Shooshami”.  This has given us the ability to break away from our reclusive ways and become a real live band.


What message do you want to transmit with your music??  JW- Be original in whatever you do!!!!!!!!!  Just because you like “this band” or “that band” doesn’t mean you have to steal their entire writing style.  It’s ok to have heroes, just don’t imitate them.  We really focus a lot of our energy on trying to be original.  I know now-a-days it’s hard to be completely original, I’m sure some people will listen to a song of ours and say it reminds them of a Neil Sedaka song or a Celine Dion song or an REO Speedwagon song.  That’s not what I’m saying, don’t have one band you like and model every song you write after one single group.  We try to be a conglomeration of all our influences.

What's your method at the time of writing a song??

JW-Typically we write in the studio.  The majority of “a sicman’s guide to illness…” (available on itunes) was written as we recorded it.  Each song either started from an acoustic guitar idea Matt had or some sort of rhythm or sequence that I laid down.  Basically, one of us will have an idea then we record it.  The songs usually develop between the two of us throwing out melodies, lyrics, or subject matter.  Sometimes we will either finish the entire song in one session and other times the idea sits for a year or two until one of us gets inspired.  In fact we have hundreds of incomplete songs in our computer that will eventually end up on future albums once completed.  This is our formula to achieve complete mediocrity.

What are your musical influences??
JW- I don’t think I could put everything down, the list grows exponentially day by day.  Primarily I would say Frank Zappa, Funkadelic, Ween, Frank Black, Neil Young, Bob Dylan, and Prince.

What plans do you guys have for the future??
JW- First of all, we have at least two albums worth of material in the can.  We are planning to release our next one before the new year, with the third one following by summer 2011.  We are also planning to push our music to some independent films.  We are hoping to expand to the festival circuit including SXSW in Austin by 2012.

What is the funniest prank you guys have taken part of while on tour or after a show??
JW- We don’t pull pranks, we are the most serious and boring people you will ever meet.  I do have a rubber chicken however.   Oh, and Matt put a whoopee cushion on my drum throne one time and we laughed and laughed.  And there was that time our bassist, Johnny Shooshami, got jooped by a baby octopus.  He also digs it with a hot YooHoo bottle and getting spewed upon with creamed corn if anyone’s interested.

If you guys were stranded in the middle of nowhere after a show or while on tour and help is 65 miles away from where you guys are, who would you guys send to look for help?  And if, while the rest wait, there's no food and the only way to feed yourself is by eating each other, who would you eat first?
JW- I would send my wife to get help and then I would indulge in a little Matteo tartare.

Which country would you guys love to play?
JW- I would say Germany, if the “Hoff” can make it there anyone can.

Which bands would you guys love to share the stage with??
JW- The Black Keys, Cher.

Are you guys OK with the direction the band is going?
JW- I would say no, I’ve always wanted to take us in a smooth jazz direction.  I think in a few years that style is really going to take off.
Check out more from SICMaN of VA by going to:  http://www.sicman.com/
Publicado por Vents en 9:46