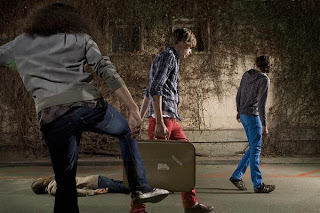 Well, there’s a definite reference to the Mexican Day of the Dead – and more specifically the theme of creating something new and different but with a nod to the past. It’s also a celebration and a party and we’re all about partying.
How the band started??
Phillip and Justin got together and made horrible noises. Only after sometime could the rest of us bare it enough to join in.

What's the message to transmit with your music??
The music is the message – if we could put it in words we’d write books.
What's your method at the time of writting a song??
We get in the rehearsal room, setup and jam. Someone plays something and everyone joins in and before you know it, something cool happens. Then we argue about it.

Which is your music influences??
Well, rock music in general is an influence. Electronic music such as Does it Offend You Yeah? has also been creeping into our music. To be honest, just being involved in the music scene and how it affects everyday life is probably our greatest influence.
What plans do you guys have for the future??
Continuing to work on the promotion of our recently released EP, ‘The Kill’ (become a fan of Dead Alphabet on Facebook and download it for free!) and playing as many shows as possible.
Which has been the funniest prank you guys have been or took part while on tour or after a show??
I can’t talk about that – what goes on tour stays on tour.
If you guys were stranded in the middle of nowhere after a show or while on tour. The help is 65 miles away from where you guys are, ¿Who would you guys send to look for help? And if while the rest wait, there's no food and the only way to feed yourself is by eating each other, ¿Who would you eat first?
Well, sending Phillip to look for help would definitely be entertaining although probably not very effective. However, Phillip would also probably be the best choice for the rest of us to eat. We’d have to draw straws to decide who goes to look for help while the other two eat Phillip. God, I can hear him whining already.


Which country you guys would love to play?
We’d love to play some shows in the UK – people there seem so hungry for new music and sounds.

With which bands you guys would love to share stage??
Spongebob Squarepants.
Are you guys OK, with the direction the band is going actually?
Nope. Not enough blast beats, autotuning and no costumes to speak of. It’s all just going downhill.
Check out more: http://www.myspace.com/deadalphabet
Publicado por Vents en 11:29