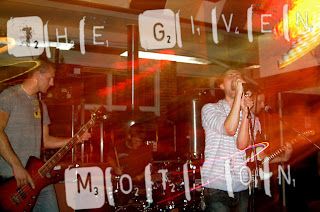 Frank: Without over thinking it, “The Given Motion” refers to the one constant, change. And the one “Given” you can always count on is “Motion”.
CJ: The meaning behind the behind the name was really about moving forward in life. I've always loved music for what it was and it kept me moving forward in certain situations. It's that feeling you get when you feel like you have nothing to hold on to. I always leaned on music to get me through what I needed to get through.
How did the band start??

Frank: The abridged version is that we’d all known each other in the Long Island music scene, but after so many bands not working out or going their separate ways, we were four musicians who’d never played all together. We were hungry and excited from the start, but totally blind.
We began playing songs CJ and Ryan had brought in and the energy was there. We did an EP, just titled “Ep” that represents that first year of songs with a small taste of what we’d become.
The new Record we’re releasing this fall is very exciting to us because we know it’s comprised purely of our sound as a band.
What's the message to transmit with your music??

Frank: “Motion” refers to the fact that life is a process and will always put you through something new. You have to be content to keep moving and not miserable searching for some elusive truth. The truth is “that you’re alright”. We think all of our songs in someway have a dynamic to them that represents some process or growth, good or bad, it’s always moving.
CJ: Being influenced by music I wanted to bring that same trend in my words. A lot of people think I say amazing things and that's a huge compliment to me. I'm flattered every single time. If there's a message that I want to get out there it's that there are times in life that you have to make a decision for yourself to move on. There's always a yearning for hope and you have to give motion to do so.
What's your method at the time of writing a song??

Frank: Songs can come in completely written, with just a little room for meddling of parts or needing elaboration on the drums, or they can start from the ground up. A good example of that is “It’s So Clear”. We were struggling to write as a band at first, messing with some song (that’s never been finished). I left the room to talk to a bass player from another band. When I came back, C.J. was playing my guitar; the opening chords to the main riff. With those 2 chords and that rhythm, I heard the rest of the riff in my head. They were perfect for each other. That song literally wrote itself in an hour and there’s video proof of it on our youtube www.youtube.com/thegivenmotion. It’s one of our best riffs and it always hypes up the crowd.
CJ: Lyrically, they're all true stories and C.J. Was feeling at the moment.
J: I used to "try" to write a lot and after the dust clears I can look back and kind of really question some of my own work. So now I never force myself to write anything and just kind of toy around and if anything catches my ear i'll usually record it and send it to C.J. for an opinion.
Frank: Some tunes we labor over, and we sometimes have to take a step back and let the song work itself out. If the song’s not there in its bare bones it’s got to be scratched. We always try to write what’s best for the song and this new record should really show that.
Which are your musical influences??

Frank: There are too many to mention. It’s always hard to say what your favorites are and most times you’re totally unaware of how things turn up in your music, even non musical influences. I think we’re attracted to good songwriters, from any era or genre. From The Beatles to Metallica and of course all of the great alternative bands of the 90’s from Stone Temple Pilots and Alice in Chains to Incubus and Taking Back Sunday. The Killers are really important to us.
J and I are particularly great fans of the great rock Bands of the 70’s (Pink Floyd begin my personal favorite and J is the KISS-head), CJ is a great admirer of Queen as well.
What plans do you guys have for the future??

Frank: We really want to make this record the best we possibly can without doctoring up our natural sound. We worked hard to do it as organically as possible and we hope people will hear it apart from the techno-overdubbed style a lot of bands fall into in the digital-fix-all age.
We want to make a great record and bring it to as many people as humanly possible.
We honestly believe that when people hear it they will like it, relate to it and really start to understand The Give Motion as a band. That musical connection with people is what we seek
We do however have a few interesting offers for things like iPhone apps and a music video near completion, but they were offers from people who liked our music so we felt it was right to move on. One thing we’ve really moved into is Youtube, which should showcase a different side of the band in 2010. Definitely look for us there.
Which has been the funniest prank you guys have been or took part while on tour or after a show??

CJ: I wouldn't necessarily call it a prank because Ryan did it to himself. Ryan accidentally locked his drums in his car 20 minutes before a show. We had to call a tow truck because a police officer wouldn't help us out. We were RIGHT next to the station and they wouldn't help him. It cost us all our ticket money, but we decided it was worth it to play anyway He ended up pulling off some time and finally got on stage and rocked out pretty hard. Everyone was moving. It was definitely one of our best stage experiences.
If you guys were stranded in the middle of nowhere after a show or while on tour. The help is 65 miles away from where you guys are, ¿Who would you guys send to look for help? And if while the rest wait, there's no food and the only way to feed yourself is by eating each other, ¿Who would you eat first?

Frank: I’m pretty resourceful. Driving a crappy car, I know about being stranded. I could probably figure something out. If there was no food, we would eat J because he’s the biggest and can feed the most people.
CJ: I would send myself but if I had a broken leg., I'd send Frank


Which country you guys would love to play?

England is definitely a must for its pure musical history, from Queen to Radiohead and the New Wave of British Heavy Metal. That and we speak the language. Playing Royal Albert Hall would really mean something to us as a band. A favorite band of Mine, Opeth Just did it on their 20th anniversary tour.
The other side of course is that urge inside you to go places completely alien that you’d never conceive of and can always get a girls attention with. “Oh sure, I’ve played Srilanka, Prague and Lichtenstein”
Also somewhere in South America would be out of this world. Those people down there just have a mass appreciation for music and are really passionate and crazy for it. It's inspiring to say the least.
With which bands would you guys love to share the stage??
Frank: We’d be honored to share the stage with anyone who will have us. To sort of answer the question another way, we’d love to be considered contemporaries of bands like Incubus and The Killers, who are still really current, but heroes to us as well.
J: I hope someone eventually is saying they'd love to share the stage with "The Given Motion"
CJ: I was thinking about this today... My Chemical Romance. They're dropping a new album soon and that'd be insane. But of course I'd choose incubus. Huge influence of mine and playing with one of your influences is an absolute honor.
Are you guys OK, with the direction the band is going actually?
Frank: Absolutely. We’re excited more now than ever at all that’s opened up to us. The music is flowing and we don’t know how it’ll sound tomorrow.
Don’t get me wrong, there’s no shortage of drama; a booker who wants to kill you or some Schizophrenic man at a club who wants to be your “manager” and gives you some one else’s business card, but its all experience.
J:  When you can write tunes and have people come to your shows and give compliments like it's going out of style, well that's just awesome. The listeners like our direction and so do we.
CJ: Right now, more than ever. I can't wait to see what happens next!