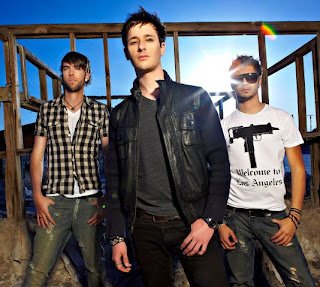 What's the meaning behind the band's name?
"Stretford End" is a reference to the West End Stands in the Manchester United Futbol stadium. The crowd there is supposed to be so loud that you can hear them from 10 miles away. We thought that would be a cool name for a rock band.
How the band started??
The band was started when Alex fought Prentice in a jello-wrestling match in Mexico in 2009. After a lot of shrieking, the match was declared a draw and they went out to eat burritos in celebration at a taco stand where Ryan was working as a line cook. Upon laying eyes upon Alex and Prentice, Ryan had a vision that told him to join forces with them and concur the world through music. He laced their burritos with sleeping pills and, after they passed out, dragged their sleeping bodies into his 1992 Cargo Van. Ryan then set fire to the taco truck, in what became known as the "Great Mexico Blaze of '09", and drove off.
What's the message to transmit with your music??
We want to speak about life, love, death and the important social and political issues of our time.
What's your method at the time of writting a song??
A long time ago, Alex captured a magical badger named Waldorf who has the unique ability to write sheet music. We just play what he writes down.
Which is your music influences??
Everyone in the band has varied musical tastes, from Green Day to Bach to Johnny Cash to Justin Timberlake.
What plans do you guys have for the future??
We want to organize the biggest tomato fight ever. Also we should probably look into building a fanbase.
Which has been the funniest prank you guys have been or took part while on tour or after a show??
We have lit Alex on fire, and forced Ryan to drink an entire jug of maple syrup.
If you guys were stranded in the middle of nowhere after a show or while on tour. The help is 65 miles away from where you guys are, ¿Who would you guys send to look for help? And if while the rest wait, there's no food and the only way to feed yourself is by eating each other, ¿Who would you eat first?
We'd send Alex out to look for help, cause he walks at about 65mph normally. Ryan is incredibly devious and would probably stare at Prentice until he persuaded him to let Ryan eat him. Seriously, Ryan can out-stare cats.
Which country you guys would love to play?
We would love to tour Brazil.
With which bands you guys would love to share stage??
Green Day, 30 Seconds to Mars, Our Lady Peace
Are you guys OK, with the direction the band is going actually?
It depends. Who's driving? If Alex is driving, then we have no idea which direction we are going.