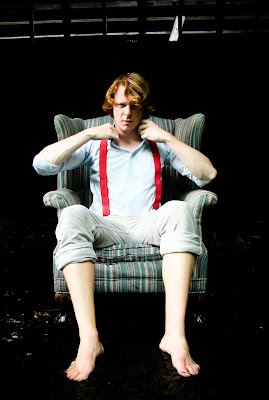 1. I started writing music 4 years ago when I taught myself how to play guitar.  I had always been a singer growing up because my parents are ministers and that always left me singing in the church choirs.  The songwriting came naturally to me, so after I taught myself how to play guitar when I was sixteen being a singer/songwriter just kind of came to fruition right off the bat.
2.   I don't really have a specific message that I'm trying to get out to listeners.  I guess I just try to reach peoples' hearts with the music.  I want to move people who listen to my songs.  I want them to laugh, cry, smile, and shout out loud when they hear me sing and play.
3.    Writing a song happens in a different way almost every time.  I sometimes hear lyrics and a melody while I'm walking around town, so I record them on my phone and then put them together with music as soon as I get back to my guitar.  Other times I get smacked in the back of my head by the entire song and I sit down and write it all together in 15 minutes.  A lot of times I'll also just have a chord progression that I've been playing around with for weeks and then finally lyrics and a melody will just come together with it at two AM.

4.    Musically, I'm very influenced by other singer/songwriters like Ray Lamontagne, Damien Rice, Glen Hansard, Justin Vernon, and Jaime Cullum.  They all have very apparently different styles of writing, playing, and singing but their music always shakes people's hearts and hits them somewhere much deeper than most music.  I really admire everything that all of those guys do and if I could have a career like any one of them I would be ecstatic.

5.    My plans for the future are to make a full-length album, because my current CD, "The Carolina EP" has been so well received.  I plan on garnering a large fan base all across the nation by touring every summer, and eventually in the next couple of years I'm going to move out to Los Angeles and bring my music to a city with a much larger audience.  In the end, I plan on making a lifelong career out of singing, playing, and writing music so make sure you guys keep looking out for my name to see where I am in all this.

6.    Well, I tour by myself so I don't really have any other band members to pull pranks on, which sucks.  But this one time I did stick my hand in hot water while I was asleep.

7.    If I was stranded in the middle of nowhere, I would build a piping fire to make smoke signals with while I went into the wilderness to find sustenance.  I've watched enough Bear Grylls to learn how to cut open a camel and sleep inside of it so I think I would be alright surviving until a helicopter flew by to see my smoke signals.  You see, I have to resort to all of this because I have no band members to send out for help or to eat for food when I started starving.  Though, I do think my bass player would go for help  because they're the smoothest, and I'd just eat my backup guitarist, cause, ya know, he's a backup.

8.    If I could play in any country I would go play in Ireland in hopes that I could become a songwriting sensation in Ireland, and then I'd be held in high regards along with Damien Rice and Glen Hansard.  It would be glorious.


10.    I love the direction that I'm going in musically.  I've been able to garner fan support, record and release my first record, and book shows in several different states all by myself so far and if I can keep this kind of momentum up who knows where I will be in a couple of years.  I can't wait to see where this all takes me and I can't wait to spread my music to more ears and hearts with the help of magazines and such like you Vents!
Check out more:  http://www.reverbnation.com/nedsc
Publicado por Vents en 8:49