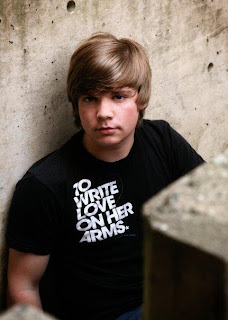 What's the meaning behind the band's name? Day Dreamer’s Prodigy came as a catalyst for all of the dreams I’ve always had, it’s like my way of really opening up, and becoming what I’m supposed to be.
How the band started?? I actually started Day Dreamer’s Prodigy while I was in another band. My intent was to use it as a back up project, and I slowly fell in love with it.

What's the message to transmit with your music?? Since I was little I've always been a music lover, I write to live, I couldn't change it if I wanted to. I'm also aware of the fact that music has the ability to go places that people can't, it can reach in and reveal things we weren't aware of ourselves, but the only way it can is when the writer is completely honest and real with what they feel, and where they've been. My intent is to do just that, tell people where I’ve been, and then hopefully others will see they are not alone, and gain encouragement and hope to make it out of where they are.

What's your method at the time of writing a song?? I actually don’t have a method. I just love to write so much that I write about 3 or 4 songs a day, and a couple poems too.

Which are your music influences?? I have so many that naming names would not fit, but I’ve always enjoyed the indie stuff, and my range goes from metal all the way to soft pensive acoustic.
What plans do you guys have for the future?? I’m finishing up my EP (Forget The Letters) and I’ll release that late this year. Then I plan to tour a lot to see all my awesome fansJ

Which has been the funniest prank you guys have been or took part while on tour or after a show?? Well I (Benjamin) am the only one in Day Dreamer’s Prodigy, but I do have my friends ride along with me on tour. I would say the funniest one is when my friend Corey was riding up front with me (he was asleep) and I got behind a car being towed, and jerked the wheel and screamed, he woke up and screamed at the top of his lungs and tried to jump into the back seatJ It was great.

If you guys were stranded in the middle of nowhere after a show or while on tour. The help is 65 miles away from where you guys are, ¿Who would you guys send to look for help? And if while the rest wait, there's no food and the only way to feed yourself is by eating each other, ¿Who would you eat first? Well I always have different people with me, but I would send the fastest to get food, and keep the slowest with me to eat.. Haha, that’s so demented..

Which country you guys would love to play? Australia! So I can hang with the kangaroos.

With which bands you guys would love to share stage?? The Almost, Taking Back Sunday, Fall Out Boy, Switchfoot, Jon Foreman, Relient K… The Rolling Stones! Haha


Are you guys OK, with the direction the band is going actually? I’m okay with where we’re headed, but I want more, I always do. I love the direction, I just want it to move faster and stronger.
Check out more: http://www.myspace.com/daydreamersprodigy
Publicado por Vents en 12:15