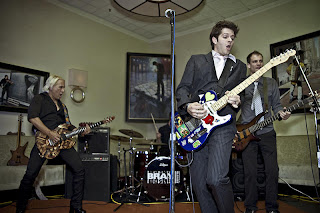 What's the meaning behind the band's name?
I met this group of musicians that i thought were amazing.  I asked them "What do you call yourselves?"  they said "Bray."
I said "crazy! That's my name!"  We all agreed this was too much of a coincidence, and so we just kept the name.

How the band started??
The band started when i decided i didn't want to work 9-5 anymore.  i had these songs, and i wanted to share them and see what was on the other side of life.
i was ready for an adventure, so i put out some ads and auditioned some players.  before you know it, my strange funk/rock trio was playing at the Hotel Utah in San Francisco.  this was thanks to an invite by a fellow artist named PC Munoz.

What's the message to transmit with your music??
The message we would like to transmit is love.  people are most divine when they follow their true hearts.

What's your method at the time of writting a song??
My songwriting method does not fall under any particular process.  sometimes i start with a drum beat, sometimes a riff, sometimes a melody.
Some songs come together in a few minutes; others have taken months.  i do have situations that tend to inspire songs... usually something happens while jogging or in the shower.  i recently wrote a song from a funny line i heard on The Simpsons.

Which are your music influences??
My music influences are wide ranging.  i love all kinds of music.  the members of the band often inspire me, and i find myself writing with their strengths in mind.
Some of my current favourites are david bowie, david sylvian, and david byrne.  anyone with the name David is good.

What plans do you guys have for the future??
to keep improving and exploring.  to continue building our european tours and branch out in the states.  to make more money.
And... to play for the military and share this experience with our listeners.

Which has been the funniest prank you guys have been or took part while on tour or after a show??
Our bass player has a rule.  if you leave a drink sitting around, he will drink it.  if you leave to go the bathroom, and your drink is full.  it will be empty by the time you return.  the bass player warns you of this rule before tour.  he feels this is fair.  well, one night a friend of ours pissed in a beer glass and "left it" in front of the bass player. It was foamy and looked enough like beer, so the bass player drinks it and makes a face like he just witnessed a murder.  it was the greatest moment of our lives.

If you guys were stranded in the middle of nowhere after a show or while on tour. The help is 65 miles away from where you guys are, ¿Who would you guys send to look for help? And if while the rest wait, there's no food and the only way to feed yourself is by eating each other, ¿Who would you eat first?
If we were stranded in the middle of nowhere with nothing to eat, i think we'd start by scavenging around for some hot sauce. Everyone knows people taste better with hot sauce.

With which bands you guys would love to share stage??
No Doubt, Franz Ferdinand, Interpol, The Killers, Paramour, Phoenix, David Bowie, U2, Foo Fighters, Keane..... so many great ones.

Are you guys OK, with the direction the band is going actually?
The band is changing.  the line up will soon be different.  no hard feelings, just time to try some different things! We are all excited about the future and grateful for the past and present.
Check out more: http://www.myspace.com/bray
Publicado por Vents en 10:40