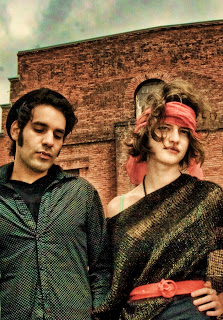 How did the band start??
Loveseat happened accidentally after our previous bands broke up, and we’d get together playing and drinking just for fun. We realised we just missed played music together, but after releasing the EP we’ve received more feedback in 6 months than in our five years playing music.
What's the message you transmit with your music??
I’m alive!

What's your method at the time of writing a song??
We use a home studio for lots of pre-production. Pouya writes the melodies on guitar and using programmed synth, drums, bass and samples, and we perfect the vocals and live sound in the studio and rehearsal space.

What are your music influences??
Names are too many to name. Our lyrics often come out of obscure dreams and fantastical thoughts. We write songs about talking to Amazon gods and conquering the world with an army of toothpicks.
What plans do you guys have for the future??
We want to play for everyone, everywhere.

What’s the funniest prank you guys have been or took part while on tour or after a show??
Probably when our bassist asked us to grab him a sandwich before a gig in Chinatown. We bought a live crab from the market and handed it to him in a paper bag.

If you guys were stranded in the middle of nowhere after a show or while on tour. The help is 65 miles away from where you guys are, ¿Who would you guys send to look for help? And if while the rest wait, there's no food and the only way to feed yourself is by eating each other, ¿Who would you eat first?
I would send the band members for help, and eat the leftover session players.

Which country would you guys love to play?
A tour of the band members’ home countries! It would span Persia, Eastern Europe, East Asia, North America and the Caribbean
With which bands would you guys love to share stage??
The Flaming Lips, they always pull stuff like naked dancing women or huge balloons or animal costumes.

Are you guys OK, with the direction the band is going actually?
The band is so new that the direction isn’t completely defined, but we are so far.
Check out more: www.loveseatmusic.com
Publicado por Vents en 11:02