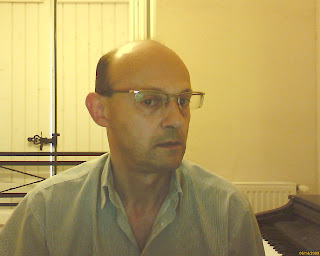 How did you get started with all this??
I'm French and I'm born in a little city of the south of France. I was fifteen years, and a day I have heard in a feast of my town, a band which played "Hey to-night" of the Creedence Clearwater revival. I was subjugated by this song that I didn't know.
So the next day, I have searched if there was a French radio which played this song, and after having listened to several radios, I have listened the DJ to say " and now hey to-night by the Creedence Clearwater revival". I was euphoric and I had this music in my head all the journey. Then, I wanted to know more about the Creedence and I began to hear others American and English bands. I was passionate by this genre of music. When, I hear a track of The Beatles, The Rolling Stones or The Who, I kept the song in my head the entire journey. Then, my parents have bought me a guitar and I began to compose a few songs on this guitar. Finally, I can say that the discovery of the Creedence has decided me to play and to make music.

what’s your method at the time of writing a song??
I have music in my head all the time since my adolescence, so most of the themes of my songs were in my head when I started to write them.
But, I love create music in walking in the streets or when I'm in a train, in the tube, in a car or a bus. At this time, I let my imagination. I need to see scroll landscapes or many peoples that I didn't know, the crowd inspires me. When I have a good song, I play it in my head several times and I keep it in my memory. Then, I play on my piano the air which I memorized and I make the orchestration of the song. I attach great importance to the sound of each of my songs, and I also work a lot in search of the best instruments that stick to the themes of my tracks. I have in my memory many songs that I have not yet written and recorded.

Which is your music influences??
If I wanted to list all my musical influences, this page is not long enough. But I can say that there are a forty major artists or bands that have influenced my music.
I can list : King Crimson, Pink Floyd, The Who, The Creedence, Supertramp, Genesis, Yes, The Beatles, The Rolling Stones, David Bowie, Rod Stewart, Kraftwerk, Santana, The doors, The Cure, Joy Division, Mozart, Ludwig van Beethoven, Liszt, Elgar, Eric Satie, Police, America, The Eagles, Outlaws, Camel, Kansas, Toto, The Stooges, Giorgio Moroder, Bruce Springsteen, The Clash, Deep Purple, Slade, The Beach Boys, Van Halen, Simon and Garfunkel, Bob Dylan, Téléphone, Serge Gainsbourg, Jacques Brel etc.....
There are yet many and many others musicians; I hope that they will excuse me if I don't list them.

What plans do you have for the future??
Receive Oscar of the best music film is the purpose of my life (laugh).
No, I am just kidding. Sign with a record label and release a CD of my songs will be very fine.
Also, I should like make a soundtrack of a great film or television. But, my main wish would be to survive on my music and not having to do anything to live.


If you were stranded in the middle of nowhere after a show or while on tour. The help is 65 miles away from where you and your band (If any) are, ¿Who would you send to look for help? And if while the rest wait, there's no food and the only way to feed yourself is by eating each other, ¿Who would you eat first?
These are 2 good questions. Indeed, I'm never asked to me and I hope it never happen to me. Well, I think that I should send my wife to look for help. She has an iron will and she's extremely resourceful. For the second question, it reminds me of the true story that happened to a Uruguayan rugby team in the 1970's. Their plane crashed on an Andean peak at 6000m altitude. They stayed 3 or 4 months without food, and to survive they ate those who died. I think that it's terrible to be forced to do that. But if it was necessary to make this, I should take a man or a woman that I don't like, and I hope ( he or she ) will be better to eat than have to bear when( he or she) was alive.

Which country you would love to play?
I should love to play in USA. It's the country of the blues, the rock' n roll and pop music. Americans are musicians, and they love good music.

With which bands you would love to share stage??
My dream will be to share stage with King Crimson. It's my favorite band. Their music is magnificent.
For thirty years, I have their records and CD's and I listen them again and again.
I will like to meet Robert Fripp and John Wetton, it would be a great pleasure for me.
Check out more: Myspace.com/neantderthal
Publicado por Vents en 7:30