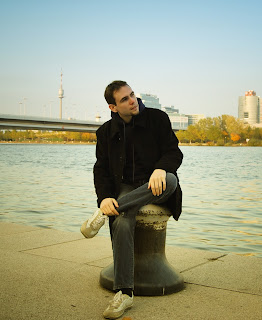 It started when I got my upright piano when I was 3. The problem was that I much more enjoyed playing my own things than to practice the pieces my piano teacher gave me. The composing side was always stronger but when I started to write my own songs around 2000 I knew that I have to develop the performing side too because I couldn’t imagine to hand over these personal songs to an other performer. It was tough at the beginning but now I enjoy this as much as the writing.
What's the message you want to transmit with your music??

Even though my songs are quite personal I’m always asking you for to discover your very own stories through these. It could be a much more personal expedition for you if you listen to my songs with this request in mind. The stories I’m walking through are not always easily accessible but I think the effort I need you to make is relevant. I want you to discover your own strength or weakness, perseverance and humanity. I know it sounds somewhat hackneyed but I really don’t like the trend that we are getting everything well-cooked. The tastes are better if you know the ingredients.
What's your method at the time of writing a song??

I always sketch the lyric first. I’ve tried out the opposite but it didn’t work for me. I got to translate the words into music and when I’m writing the words down there are melodies in my head that are trying to get along with the words. The inspirations are coming from really very different places. Sometimes it’s from a street view, sometimes from a TV show. When the stage was all set I try to find the chords and the proper instrumentation. The truth is that I’ve got a very strong imagination about the song’s sonic shape and most of the time I’m quite sure what I want to hear at certain passages. I also must admit that a song is never finished to me. After I froze it in a certain time frame it is always only one version I can offer you for listening. That’s why I love to play live because I can show you another possibility that may be another interesting version.
Which are your music influences??

First and foremost, Tori Amos. It’s not just about being an “ears with feet” but I dived deep into her compositions as much as I could. For me “Scarlet’s Walk” was the Big Bang. Since I was trained on classical music the baroque era and the contemporary composers - mostly Michael Nyman and Philip Glass – are important inspirational sources to me. I can mention Ben Folds, Vienna Teng, Vonda Shepard, Alanis Morissette and nowadays Imogen Heap. I’ve discovered her at the time when she released “Ellipse” and all I can say she is marvelous.
What plans do you have for the future??

Now I’m working on a concept album which will be my most complete work to date. It is a huge jigsaw puzzle I have to piece together. I’m planning to release my album back from 2008 “Secret Room” this December and the album mentioned above in spring 2011. I’m waiting for approvals form various festivals next year so hopefully there will be live performances in the near future. Fingers crossed.
Which has been the funniest prank you have been or took part while on tour or after a show??

Well to be honest I’d rather enjoy the traveling or take photos. It’s enough fun to be with my friends and have a good chat with them. I need to relax before and after the show.
If you were stranded in the middle of nowhere after a show or while on tour. The help is 65 miles away from where you and your band (If any) are, ¿Who would you send to look for help? And if while the rest wait, there's no food and the only way to feed yourself is by eating each other, ¿Who would you eat first?

Tricky question. This time I would be selfish so I’d send my sound guy to look for help. You know you can get a sound guy anywhere (that’s not true Ate!). I must tell you that I would starve to death if I only could eat a human being. It’s not the kind of flesh I like.
If he wouldn’t return for a long time in the worst case scenario I think I have to walk the 65 miles. But thanks for the hint guys; I won’t ever hit the road without my fave salmon sandwich after the show.
Which country you would love to play?

If it’s Europe it would be Sweden or Spain. If it’s America it’s definitely Canada. My big dream is to get to Japan once.
With which bands you would love to share stage??

I would be honored if I could share the stage with Imogen Heap or Vienna Teng. It would be very exciting to perform some of my songs with Imogen’s method of playing live.
Are you OK, with the direction the band is going actually?
The most important for me is not to stuck in the sonic formulas achieved. I love to explore new territories, this is one of the factors that keeps my writer side alive. I think I have my own sound, it was a long way to get here and I can say I’m fine with my direction.
Check out more: http://www.franksharman.com/
Publicado por Vents en 11:16