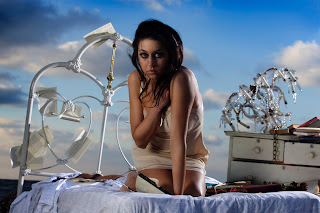 How did you started with all this??
I've been playing music since I was 14. I started as a ballerina then decided playing guitar and eating food was a lot cooler. I signed to a big company at 16 then when i was 18 I signed to Geffen Records, and just never really stopped.

What's the message to transmit with your music??
I don't try to transmit any specific message, besides truth and real emotion.

What's your method at the time of writting a song??
I just let the chords and music tell me what to write. A song always comes from some emotion, and I just go from there and tell my story.

Which are your music influences??
My biggest influences are Roy Orbison, Van Morrison, Lisa Loeb. Fiona Apple, and Death Cab for Cutie
What plans do you have for the future??

Which has been the funniest prank you have been or took part while on tour or after a show??
Well, when I was on warped tour things always got crazy. We weren't the biggest pranksters though, I think my band and I are dorks, so I don't have any pranks to talk about.

If you were stranded in the middle of nowhere after a show or while on tour. The help is 65 miles away from where you and your band (If any) are, ¿Who would you send to look for help? And if while the rest wait, there's no food and the only way to feed yourself is by eating each other, ¿Who would you eat first? I would send myself to look for help, because I am the most responsible. I think I would eat my guitarist first, because he is the tallest and would be the most filling. But maybe I'd kill them all, they all look yummy.

Which country you would love to play? Anywhere in Europe!! I want to go so badly!!

With which bands you would love to share stage?? Death Cab for Cutie or Tori Amos would rule!

Are you OK, with the direction the band is going actually? Yes, I am super proud of my band and the music that we make!