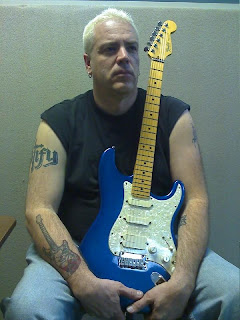 As a 12 year old, I heard the guitar playing of Jimi Hendrix on the radio and my life changed from there. I just had to do what he did. I had to find out how he got the sounds he did.
What's the message to transmit with your music??
It depends on the song.  Some of my songs are about love, some of them are about conquering evil.  But I hope to inspire listeners with all of my songs.
What's your method at the time of writting a song??
Emotions inspire me to write. I hand write my lyrics first, then enter them on Sonicbids.

Which is your music influences??
Everyone from Jimi Hendrix, Peter Frampton, Robin Trower to Creed, Zakk Wylde, Metallica
What plans do you have for the future??
To go on tour.
Which has been the funniest prank you have been or took part while on tour or after a show??
I was performing at a club in NYC with my band. The place was packed. The club was on the 3rd or 4th floor, and important record companies, magazines and management including Guitar World were there.  As soon as we took the stage, a German Shepherd came running across the stage, stopped on stage and proceeded to relieve himself in front of everyone, causing a real "stink."  We kept playing as the club owner chased the dog around the room.  Needless to say, it was downhill from there.

If you were stranded in the middle of nowhere after a show or while on tour. The help is 65 miles away from where you and your band (If any) are, ¿Who would you send to look for help? And if while the rest wait, there's no food and the only way to feed yourself is by eating each other, ¿Who would you eat first?
We'd all go for help instead of eating each other.

Are you OK, with the direction the band is going actually?
Yes!  I'm bringing the Guitar Hero to the forefront again.