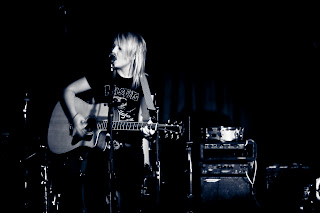 I've been playing the guitar since I was 7 or 8, and I've been in bands since I was 16. I've always written bits of songs and poems, and I decided to put the two things together. I've been really concentrating on the whole singer/songwriter thing for the past couple of years.What's the message to transmit with your music??I guess, just to have fun and enjoy yourself. I write about a lot of real situations and people, but don't take it all too seriously. I hate music that takes itself too seriously. I don't have any hidden messages, like "kill the cows" or anything.
What's your method at the time of writting a song??
I'll probably have a rough idea first of subject matter, then just play around on my guitar to get a tune together, and mumble a load of words to myself until something sounds clever.Which is your music influences??I have lots of different influences. I used to play in a punk band, and I like a lot of heavier music. Folk wise, I'm a big fan of Johnny Cash. I love the energy of people like him, and Bob Dylan.
What plans do you have for the future??
I would love to be able to carry on gigging and playing my music, and be able to make a living from it. That would be the most amazing thing in the world. Apart from if my cat could talk.Which has been the funniest prank you have been or took part while on tour or after a show??
Gigs usually end with me covered in beer. Not exactly a prank. But amusing none the less.If you were stranded in the middle of nowhere after a show or while on tour. The help is 65 miles away from where you and your band (If any) are, ¿Who would you send to look for help? And if while the rest wait, there's no food and the only way to feed yourself is by eating each other, ¿Who would you eat first?
Well.. as I'm not in a band, and it's just me, I guess I'd have to eat my own face. Or perhaps a local squirrel. If the nearest 'help' was 65 miles away though, I'm sure I could walk that. I once rode a bike 75 miles, but it took me an entire day. I imagine walking would take a little longer. But would perhaps be worth it if it meant not having to eat my face.Which country you would love to play?
I would love to tour America. One day. When I have money. And a bus.With which bands you would love to share stage??
Elvis, Johnny Cash and Jimi Hendrix.. Oh..Are you OK, with the direction the band is going actually?
Yes I'm okay thanks. And yes, the direction I'm going in is fine I think. I don't really know what direction it is, but I guess I'll just keep going until something happens. That's the plan anyway.
Check out more: www.myspace.com/lauracatlow
Publicado por Vents en 12:20