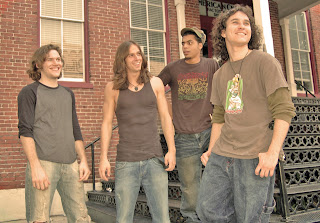 What's the meaning behind the band's name?
Brian: I wanted it to reflect not just about what the band was about, but who the audience was mostly projected at which would be our generation; hence Our Future Leaders. We all seemed to think it was appropriate.
How the band started??
Brian: We originally got together about 5 years ago.  When I moved to Orlando, I wanted to start a band and I ran into an old friend of mine I went to school with who was learning bass. I called up one of my best friends who I've known forever and was an excellent drummer to move down here and play drums with us. We found Danny through an ad and hit it off.  Since then we've gone through a few members due to personal life changes, but it all happens for a reason...and it's worked out for the best.

What's the message to transmit with your music??
As we progress I don't think there's ever one message, each song is a different story, idea, or personal event. Whether it be about Love, Life, Greed, Politics, Media, World or Social Issues...there are a lot of things that I think people are afraid to say or dont quite know how to and that's what I want to communicate to those who will listen.
What's your method at the time of writing a song??
Brian: Typically I don't write songs all at once, I will come upon an idea and write whatever I'm thinking in my iPhone or in my book..whatevers closer. I'll come back to it later with a riff or something that I've been toying with that fits the mood.  A lot of times. Danny and I are in sync telepathically and an idea I was working on ends up fitting perfectly with something he has been working on...so our chemistry has been really effective with our songwriting.
Danny: I usually start with a tribal rain dance...followed by sacrificing a lamb, which allows me to write really epic songs.
What are your music influences??
Brian: Some of my biggest influences are: The Smashing Pumpkins, Collective Soul, Led Zeppelin, Jimmy Eat World, Matthew Good, Live, Silverchair, Radiohead, & Muse.
Danny: Led Zeppelin, Jimi Hendrix, Iron Maiden, Protest the Hero, As I lay dying, mostly classic rock and metal
What plans do you guys have for the future??
We're finishing up our first EP, which will probably be released sometime in October or November this year. After which we're planning a US east coast tour to promote the album. And then...the world.
What has been the funniest prank you guys have been or took part while on tour or after a show??
Brian: One night after a show we were riding home in our previous drummer's van which is spray painted and looks a bit suspcious. At a random stop light we pull up next to a single vehicle with a little old lady in it....our friend Pete and I jump out of the sliding side door and start battling it out with kendo swords. Almost immediately, with the light still red, the lady floors it! We couldn't stop laughing.
If you guys were stranded in the middle of nowhere after a show or while on tour. The help is 65 miles away from where you guys are, Who would you guys send to look for help? And if while the rest wait, there's no food and the only way to feed yourself is by eating each other, Who would you eat first?
Brian: Danny would nominate himself to walk 65 miles, even though he would walk 500 miles and then walk 500 more. I on the other hand like chicken and I hear humans taste of chicken...I don't know if I could eat Dustin though, he has dreads and I don't like hair on my meat.
Danny likes hair on his meat.
Which country you guys would love to play?
Brian: England, Europeans tend to actually enjoy rock music, while mainstream Americans like phat beats.
Danny: Japan
With which bands you guys would love to share stage??
Brian: Smashing Pumpkins
Danny: Black Sabbath
Are you guys OK, with the direction the band is going actually?
Definitely, we're extremely dedicated to this band, and we're looking forward to finishing the album and going on tour later this year.  Then we'll see where things go from there.
Check out more: http://www.myspace.com/ourfutureleaders
Publicado por Vents en 7:04