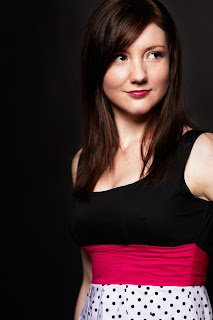 How did you get started with music?
I grew up in rural Olympia, WA, and there was nothing to do there.  So I’d run around in the yard and sing and make up songs all day long!  Then I’d come in and record the songs with my little cassette player, and I’d make up silly piano parts in the background.  It was so much fun!
What message do you try to convey with your music?
All the songs I write are really personal.  I write about my struggles with love and loss and family.  I love it when people come up to me, and say that something I wrote has helped them through a difficult time.
How do you go about writing a song?
I usually write a bunch of songs at once, and then I let them sit for a while, then I go back and orchestrate them maybe six months later, and figure out what ones I want to perform.  I’m pretty slow at writing. It usually takes me a while to get an idea going.
Who are your biggest musical influences?
I love all classical music, especially Beethoven, Chopin and Debussy.  I also really love songwriters and a lot of popular music like John Lennon/Carole King, so I try to combine those influences.  Right now I am really into Lily Allen and Regina Spektor.
What plans do you have for the future?
I am working on releasing a full-length album later on this year, and then I will be going on tour!   I plan to be touring forever!  I also want to do more film scores and classical orchestration, because that’s all I did in college and I miss it so much!
What’s the funniest prank you took part of while on tour or after a show??  Well, I do like to make up fake names and crash open stages sometimes!
If you were stranded in the middle of nowhere after a show and the help is 65 miles away, who would you send to look for help? And if while you wait, and there's no food and the only way to feed yourself is by eating each other, who would you eat first?  Oh my gosh, I couldn’t eat someone…I’d probably just try and eat some plants, I’m a vegetarian!
What country would you love to play?  Everywhere in Central/South America, India, Scotland and of course CUBA!
What band would you most love to share the stage with?  I’ve always kind of had a thing for Mick Jagger…
Are you excited with the direction your music is going?  Yes, I’m excited about writing new material, and just trying to continue to grow as a musician.  Right now the sound I am going for is more rock, and I am loving it!
Check out more: http://www.joyautumn.com/
Publicado por Vents en 12:10