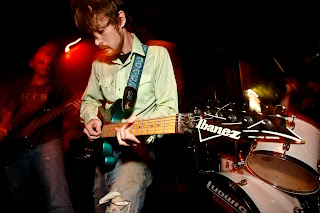 What's the meaning behind the band's name?
THERE IS NONE

How the band started??
ONE DAY

What's the message to transmit with your music??
failing is cool.

What's your method at the time of writting a song?? We try to fail as much as possible, so we just do alot of drugs and hope our producer can make it into a gold record or something.

What plans do you guys have for the future?? anchorage nebraskas plans on getting rejected over and over again for the rest of our musical career. maybe even some day we can even be rejected by a major label!!! a band can dream.

Which has been the funniest prank you guys have been or took part while on tour or after a show?? We dont pull pranks because we arent very smart. mostly just shitty emo bands play pranks on us. the prank that they play the most on us is they book a show with us, then they bring all there friends and play really really shitty music before us for way too long. and then they act like they are so cool and so much better than everyone because they make millions playing there shitty emo rock everywhere. then everyone leaves the show and then they make us play.  NO MUCHO ES GRUNGE

If you guys were stranded in the middle of nowhere after a show or while on tour. The help is 65 miles away from where you guys are, ¿Who would you guys send to look for help? And if while the rest wait, there's no food and the only way to feed yourself is by eating each other, ¿Who would you eat first?
YOUR MOM

Which country you guys would love to play? indonesia!!! the grunge scene there is massive

Are you guys OK, with the direction the band is going actually? ya, i mean, you get used to failing.