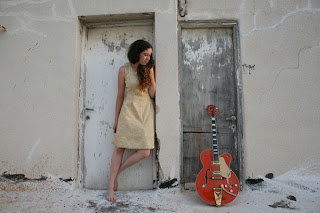 How did you get started with all this??
My sister taught me to write at age 3. I've been writing poetry ever since. At age 15 I saw Sarah McLachlan on VH-1 on a show called "Storytellers",  the simple strokes on her guitar felt magical to me, it just looked and sounded as if she's brushing her guitar before a big night out. I knew two things: I wanna play guitar and I want to own a Gibson acoustic guitar.  A while after that I saw Hendrix playing on TV, I was hipnotized by the way his fingers rolled up and down the neck of the guitar, that was another "I gotta" moment, and that's when I began my path as a serious guitar player.

What's the message to transmit with your music??
My general message, as a person, is that relationships and people are what makes life worth living.
Be the best you can towards yourselves and others, that's a true gurantee of happiness.

What's your method at the time of writting a song??
I just try to do things I've never done before, try to say things I've never said before(Or in a way I've never said them before), write chord progressions that feel like I'm hearing them for the first time, even though odds are they've been done before.
I don't have a method, which can be a problem, cause I'm heavily depended on inspiration.
I wake up in the middle of the night with a need to get out whatever's overflowing me and write through it.

Which is your music influences??
The most obvious ones are artists like Tom Waits and Fiona Apple.
In actuallity my writing is motivated by Jazz-type thinking. I love Jazz standards and I love Wes Montgomery, Joshua Redman, Wynton Kelly etc.

What plans do you have for the future??
My objective is to keep music alive in my life during my career as a therapist.

Which has been the funniest prank you have been or took part while on tour or after a show??
We stole our guitar player's belt, so while taking an emotional solo his pants fell around his ankles and then the show was really ON.

If you were stranded in the middle of nowhere after a show or while on tour. The help is 65 miles away from where you and your band (If any) are, ¿Who would you send to look for help? And if while the rest wait, there's no food and the only way to feed yourself is by eating each other, ¿Who would you eat first?
There's no one reliable enough. If I were depended on my band for rescue we'd all surely die while the messenger was getting drunk somewhere.
I've been a vegeterian since the age of 4 so canibalism isn't an option!
I'd eat the most organic outfit in the room. Assaf the drummer is the best dresser so I'd just eat his clothes.

Which country you would love to play?
France and Africa.

With which bands you would love to share stage??
FIONA APPLE.
I'd love to do a Jazz standard with her.
Other than being incredibly talented she seems incredibly bright and interesting.