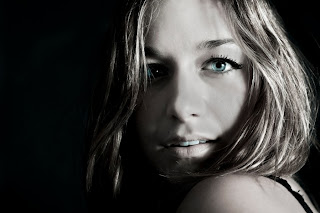 How did you get started with all this??
1.  I was a classically trained pianist since the age of 5 who decided to learn jazz piano who decided to learn how to sing the blues.  Growing up in and around New York City, the raw, soulful independent music scene really rubbed off on me and I started writing and performing my own material at the age of 15.  My mother was a New York City 60's peace and love rock fan and my father was a southern boy from Tennessee.  As a result, my music is a fusion of all of these influences.

What's the message to transmit with your music??
2.  The messages I try to send are moments of pure emotions captured in a song.  I remember being a 12 year old with my hairbrush microphone in front of my mirror belting out a Tori Amos song that really resonated with me.  Some songs bottle up quintessential emotional events and make you relive them when you listen.  I guess my "message" is really more of an intent to be a zookeeper of sorts.  Taming the beast that is our lives and capturing it in a cage of music.
What's your method at the time of writting a song??
3.  Everyone has their own method, I believe.  The truth is that I hear music in my head all day long.  It's really often time very annoying.  I can walk down the street and the hammering at a construction site sounds like a beat.  Then the horns beeping resemble a melody.  All of a sudden someone shouts and it sounds like singing.  By the time I get home I have an entire song formed in my head.  This is extremely inconvenient for going to class, grocery shopping, or an mundane task for that matter.  It often results in me needing to be within 20 feet of a piano or guitar at all times.
Which is your music influences??
4.  I'm a phase kind of music lover.  I go through phases of devotion to certain bands or artists that last a couple of months and help me to mold my music output to different themes.  When I was little, Tori Amos was really my hero for her piano-driven melodies and unmatched virtuosity on that instrument.  In high school, I was really taken by the hybrid of music developed by bands like Radiohead and Muse.  I loved their way of capturing powerful, effected beats to reinforce raw guitar riffs.  Nowadays, I go back to the masters of soul and blues.  Dr. John, the Neville Brothers, and those New Orleans cats are my idols.  If I can soak up a little more soul from their influence on me I'll be a happy happy girl.
What plans do you have for the future??
5.  As of this moment, we're in the studio working on my second album.  I'm inexplicably excited.  Everyone always says their sophomore albums are their favorite and thus far I'd say I'm going according to the stereotype.  I think it's a mix of maturation, learning the ropes of the studio, and knowing how to get the sound you want.  The album will be extremely soulful, raw, and beyond a shadow of a doubt... ME.
Which has been the funniest prank you have been or took part while on tour or after a show??
6. Hm... well it's not exactly a prank nor was it a real show, but I helped my boys from the band The Hydra film one of their music videos.  Check them out!  I may have peed my pants somewhere between filming them in costumes that resembled the Hamburglar or watching them with tritons and mermaids.
If you were stranded in the middle of nowhere after a show or while on tour. The help is 65 miles away from where you and your band (If any) are, ¿Who would you send to look for help? And if while the rest wait, there's no food and the only way to feed yourself is by eating each other, ¿Who would you eat first?
7.  I would never send my violinist, Yen Lam, to look for help.  She's easily the friendliest human being on the planet and would probably end up making friends with the townsfolk and forgetting what she set out to do to begin with.  My drummer, Dan Bynum and I would have to eat my piano.  Legend has it, it is constructed from the bones, flesh, and blood of an ancient Zydeco musician.  It's last us at least 2 years.
Which country you would love to play?
8.  I just got back from Berlin, Germany and without a doubt fell in love with the energy of the city.  I would love love love to bring my music to that scene.  Now that is a city that really and truly appreciates independent artists.
With which bands you would love to share stage??
9.  I have a deep affinity for the Black Keys right now.  I'd love to play a show with them.  Plus they're some funny characters.  Their video for "Tighten Up" actually made me LOL.  You know, like laugh out loud.  But not just metaphorically.  I really laughed out loud.
Are you OK, with the direction the band is going actually?
10.  My dear, I learned long ago not to waste time heading down a road that didn't feel right.  Give it your all and give your all to something worth it.
Check out more: www.myspace.com/gabriellewortman
Publicado por Vents en 11:50