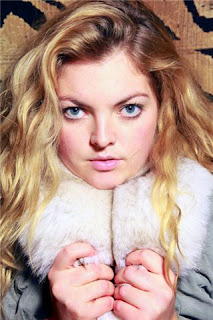 Photo by Lindsay Altoft
1) How did this all start?
Well, I followed my gut instincts and switched from acting to singing/songwriting and in less than a year the rewards for this risk have been great, including winning Original Song of the Year at the Niagara Music Awards for my first ever released song! Some shows I have been invited to play include PRIDE Toronto, Niagara Grape and Wine as well as some small tv spots! I met band members in the most unique ways; Alex is my Electric Guitarist we met on a bus to Niagara Falls, we were both hungover and loved music! Colin is my Bassist and he saw me perform at a bar and left the band that he was playing with and hasnʼt looked back since. I put an add in Craigslist for an Acoustic Guitarist and found John, who also does back up vocals. Drummers are a different story, I have a few I work with based on their availability.
2) Whatʼs the message to transmit with your music?
Mission Statement. Branding aside, music connects us, so get connected and have fun!
3) Whatʼs your method at the time of writing a song?
Usually the song informs me how it wants to be written. It also depends on who I am writing the song with, if anyone. I like to write with Colin (who plays Bass, but almost every other instrument as well). Colin? “Rhythm and words come together easiest unless a melody is so strong it needs me to find words to remember the melody, or I have music and I have to find a melody that will go with it, so the words come last. I usually write from the bass line or the drums point of view.”
4) Which are your music influences?
I started off with idols like Patsy Cline, Carole King, Janis Joplin and The Beatles but my influences expand every day from a new hit single on the radio by a new band, or from an old classic vinyl album that I forgot about from my moms collection. I think that music, like any art has a way of influencing you based on where you are in your life. Have you ever heard a song 99 times and the 100th time you get affected by it because
of something you went through that day? Songs have the power to be at the right time and place to connect deeper with you if you let it.
5) What plans do you have for the future?
I am really excited about releasing my debut album in the new year! I am also preparing to go on a mini tour in Canada and cross the boarder to the US and share my music with as many people as possible. The music video for my single “Growinʼ Up” will be released in the next month, and I hope that the video puts the album on the map. Lots of recording, live shows and new ideas and fans is what we see in the future!
John (Acoustic Guitar): “Iʼm excited for all the screaming girls and to meet Kelly Clarkson...finally!”
6) Which has been the funniest prank you have been or took while on tour or after a
show?
Iʼm a new artist and have NOTHING yet, which is so sad. But now I feel obligated to pull
a prank on someone in the band or the whole gang...boys you better watch out! Ha!
7) If you were stranded in the middle of nowhere after a show or while on tour. The help is 65 miles away from where you and your band (If any) are, who would you send to look for help? And if while the rest wait, thereʼs no food and the only way to feed yourself is by eating each other who would you eat first?
Alex (Electric Guitar): Iʼd go get help! (Whole Band) NO!!!
Colin (Bass): We would need help Alex, not beer! I would become a vegetarian or do another cleanse, I just finished one now and didnʼt eat for 10 days.
8) Which Country would you love to play?
Egypt, because I have always wanted to visit this country, but more importantly I would love to see how the women there receive my music because of the cultural differences.
Colin: England, anywhere The Beatles did!
9) With which bands you would love to share stage?
I would love to share the stage with Heart because they are amazing...Barracuda! Or someone completely out of my genre like Beyonce or Lady Gaga.
Colin: Heart...good choice Jacelyn!
John: Someone country!
Alex: Metalica.
10) Are you OK with the direction the band is going actually?
More than OK! You shouldnʼt be doing music that is just OK?!!?
Check out more: www.jacelynholmes.com
Publicado por Vents en 14:10