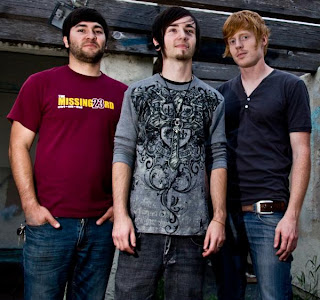 How the band started??
The band was started in a garage.  Its funny to think the band started in the most cliche way possible.  A couple buddies decided they wanted to play some music.  A couple songs were written; a few more band members added.  We used to be TERRIBLE!  A lot of practice and even more dedication has molded us into what we are today.

What's the message to transmit with your music??
The lyrics aren't all based on just one thing.  Some songs are easy to explain while others would take a few sentences to sum up.  For example, the song 'Clockwork' was written about my(Tyler, vocals) mother, or the song 'And The Horse He Rode In On' is purely western themed.

What's your method at the time of writing a song??
Generally, Caleb(guitar) or Marty(guitar) comes up with a riff they like.  They then proceed to write/record the rest of the song until they're happy.  Then Tyler(vocals) will listen to the song over and over, creating melodies in his head.  He then pins lyrics to the melodies.  After that, they all get together and jam/talk about the likes and dislikes.  It's a long, heart-felt process but it's well worth it.

What plans do you guys have for the future??
We plan to tour as often as possible, record as many songs as we can, and promote the hell out of ourselves.  We are a DIY band with very little money to spend.  Everything we do is well thought out because there's little room for mistakes at this point.

Which has been the funniest prank you guys have been or took part while on tour or after a show??
Usually the pranks happen on one of the days off on tour.  A band member will fall asleep early and bad things ensue or someone will drink a bit too much and get filmed making mistakes.  It's a bummer the next morning for said individual but it's all in good fun!

If you guys were stranded in the middle of nowhere after a show or while on tour. The help is 65 miles away from where you guys are, ¿Who would you guys send to look for help? And if while the rest wait, there's no food and the only way to feed yourself is by eating each other, ¿Who would you eat first?
We always seem to have a 'temporary drummer or bass player' with us so we would send one of them for help while the other is being prepped to be BBQ'd.  Funny story, the reason WHY we don't have a permanent drummer or bassist is for that exact reason.  I guess that should have gone in the 'pranks' section of this interview. Oh well.

With which bands you guys would love to share stage??
Oh wow!  There are a lot of awesome bands out there.  Finch would be a great band to share the stage with for sure.

Are you guys OK, with the direction the band is going actually? OOOOH yes.  We couldn't be happier with our sound.  Music is more than fun for us.  We treat it like a business but we do it how we want to do it.  The sound debatably the most important part and we're pleased with where we are.