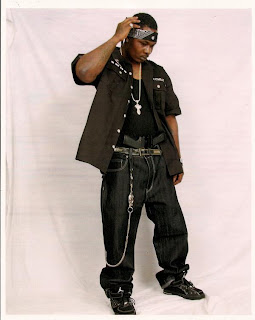 How did you started with all this??
Man! I was 12years old when I first started writing. Of course I was in to writing poetry. In school I would get bored doing my school work. I'll start day dreaming about certain things, then next thing you know, I'll put my school work to the side and then start writing about my thoughts. It's sad to say! I flunked shcool. But passed in Hip-hop.

What's the message to transmit with your music??
It's and emotional up liftment. I've offten been compared to the late great Tupc Shakur, because of my expressions when I rap. Which is an honor in itself. But I just look at myself as a Ghetto Advocate. Who sends a message of hope.

What's your method at the time of writting a song??
My method is, working out. Before I even think about writing. Oh! And a extra larg cup of Dunkin donuts coffe. Got to to have it!

Which are your music influences??
The late great Tupac Shakur was and still is my musical influences.

What plans do you have for the future??
Man! I'm getting alot of gigs right now. And I'm completely booked for the whole month of october. I have alot on my plate, but not enough for me. I'm a work a work-aholic. I'm just Grinding right now. My single"REAL MEN" is doing good on itunes at the moment. I'm looking to be atleast 2-times platinum by the New Year.S.FACTOR is trying to be in everything for the future.

Which has been the funniest prank you have been or took part while on tour or after a show??
Me and my associate's was at a festival in vermont, and it was nothing but mud. The mud exceeded pass the sols of ya shoe's and we were watching everybody' s vehicle get stuck (Of course we didn't have that problem). But there was people who was out there helping others navigate there way to safe land. Well, there was nobody out there at this time and this guy I guess he wanted me to help! I seen where there was more mud. And I sent him straight for it. He had a sad look on his face as I watch him fade away. Thanks to me he ended up in the woods. He was doing o.k. until he met me.

If you were stranded in the middle of nowhere after a show or while on tour. The help is 65 miles away from where you and your band (If any) are, ¿Who would you send to look for help? And if while the rest wait, there's no food and the only way to feed yourself is by eating each other, ¿Who would you eat first?
Well far as sending some one it'll have to be my boy "Twan" because he the one who's dependable like that. But far as eating?? I'm a picky eater! Because dudes in my circle don't eat enough. So I'm dead anyways.

Which country you would love to play?
Japan because they follow the american Hip-hop culture hard. Or maybe the U.K. But one of goals is to play in every country in the next couple of years.

With which bands you would love to share stage??
50cent, Jay-Z, any of the Young Money cats. Any of the ones in this time. It'll be an honor to share the stage with any of those artistes.

Are you OK, with the direction the band is going actually?
ou know I'm definately pleased with my career and the way it is going. And I know its only the work of God. Its my season. I Just hope I get more features and more gigs.