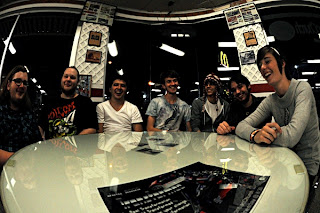 What's the meaning behind the band's name?
We named our band after the missing person, Claudia Lawrence. Her father put a huge reward up for her. We thought we'd help the cause.

How the band started??
I was a solo artist for a while but got bored with how nobody takes you seriously or really cares about what you're singing. So I quietly and slowly assembled a band of strangers and misfits and we kind of took our different styles and fused them together under one central vision.

What's the message to transmit with your music??
There's beauty in the ugliness of life. And really, most of these songs are reminders to myself of how to act and think so the future version of myself doesn't forget.

What's your method at the time of writing a song??
I really just strum on a guitar or ukulele, or dabble on the piano until some pattern catches my attention and then I focus on that pattern, remember it, try to get a sense of the tone and emotion for the lyrics and from there it's just thoughts compiling into one long rant of a song.

Which is your music influences??
Well we have seven members currently and each one has a different interest in music. Some enjoy metal and hardcore music, others indie music, some bluegrass, jazz, punk, blues, rock, alternative, classical, post-hardcore, low-fi, experimental, dance music and so on and so forth. We really take the good from each and use them together to create our sound.

What plans do you guys have for the future??
We plan to tour more for our current album "The Boy in the Well" and we're writing our next album to be entitled "Shapeshifter" which will be a shorter CD with a calmer feel and a more technical approach to the song writing.

Which has been the funniest prank you guys have been or took part while on tour or after a show??
We once slashed the tires of this band we'd been friends with for months and they couldn't finish their tour. It was hilarious...I'm kidding. We really don't have many pranks to write home about, but this gives me the idea to start.

If you guys were stranded in the middle of nowhere after a show or while on tour. The help is 65 miles away from where you guys are, ¿Who would you guys send to look for help? And if while the rest wait, there's no food and the only way to feed yourself is by eating each other, ¿Who would you eat first?
I'd probably go for help and bring our drummer Josh with me. Leaving the others behind. I would hope the rest of them would not resort to eating each other instead of maybe foraging for food first or at least walking down the road to look for a roadside diner or maybe a fruit stand. But if one person was to be eaten, it'd be Kelsey our violinist because she is the weakest and would be the easiest to knock out.

Which country you guys would love to play?
Well to name a few Canada, France, Germany, UK, and Portugal. But to be honest, anywhere in the world would be wonderful to play music.

With which bands you guys would love to share stage??
There are so many bands we'd love to play with. Some of the ones the others in the group said they'd want to play with are The Arcade Fire, Sigur Ros, Kiss, Neutral Milk Hotel, Bruce Springsteen and Bob Dylan.

Are you guys OK, with the direction the band is going actually?
Right now we've hit some road bumps, but they are to be expected while driving. But, I can honestly say I enjoy the way we are headed because we're still growing as both musicians and people and what we want to play will grow with us. And there's no reason not to pursue whatever direction we want to pursue.