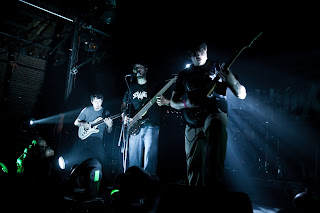 What is the meaning behind the band’s name?

The word, “Ashkira” is an Americanized version of the Basque word, Askurra, meaning “Loud Strength”.
How did the band start?
The band began in February of 2002, when Peter, Thomas, David, Nick, and Ryan (former lead singer) decided to form a band that was modeled on our similar love of heavy-metal music. Still in high school when the band began, we have emerged 8 years later with almost the exact same line-up, except that David Minhondo took over lead vocals in May of 2007.
What’s the message we hope to convey with our music.
Although we cycle through a large variety of topics in our lyrics, the primary message the band portrays is one of overcoming of struggle, in its various forms.
What is your method to writing songs.
Generally, someone will come in with a line or series of riffs and, if it is agreed upon by everyone in the band, we will begin using those lines as a foundation to a song. However, we generally compose music in a collaborative process where everyone’s ideas are expressed and attempted.
What are your musical influences?
Though we have done a large amount of growing, musically, since the band started, we still share many of the same influences. These include:
·         Darkest Hour
·         Parkway Drive
·         Lamb of God
·         Machine Head
What is the funniest prank you have every pulled on a bandmate?
The funniest prank ever pulled was about two year ago, we were playing a show in Alameda (CA) and our guitarist, Nick, created a tab at the bar. Thomas and David, as well as some other friends, discovered this welcome secret and proceeded to buy as much booze as possible that night…compliments of Nick. Cut to a couple hours later, Nick got his bar tab and was none too happy that we charged a large sum of money to his tab. Nor was his anger quelled when David and Thomas’s response was to fall over laughing. Luckily, Nick was raging drunk and his anger quickly turned to laughter… Kinda boring, but we don’t prank much…we’re just a bunch of funny-ass dudes.
If you were stranded on a bus after a tour, who would you send for help? Who would you eat first?
Thomas would go look for help, to avoid getting eaten if we weren’t discovered. If he failed in his mission, however, Thomas would be the first to be eaten.  (Thomas, “You can eat me…if you catch me!)
What countries would you love to play in?
·         Anywhere in Europe/Scandinavia
·         The States (North America)
·         Japan
·         Mexico City
·         Russia
With which bands would you love to share the stage with?
·         Parkway Drive
·         Darkest Hour
·         Machine Head
·         Metallica
·         Lamb of God
Are you okay with the direction of the band?
Wow! You guys are trying to stir the spot. The answer is yes and no. Yes, we are happy with our writing style and the new songs we are writing, which is a big deal because we made a lot of changes to our song structure and the way we go about writing music. No, because the bay area is a tough scene to get well known in metal. There is a lot of competition, but more than that the market for metal in this area is minimal at best. Sad for an area where bay area born bands like Metallica and Machine Head have claimed their stake as heavy metal icons…you’d never know it living here.
Check out more: http://www.myspace.com/ashkira
Publicado por Vents en 9:43