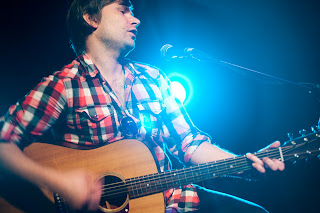 How did you get started with all this?? By accident really.. While using a bar of Irish Spring as a mic in a empty bathroom signing

Prince "Purple Rain and then my own stuff lets just say I became very clean:)

What's the message to transmit with your music?? Love.. and maybe some thoughts on religion and super star phony types

What's your method at the time of writing a song?? Driving in my car or right after a show when I'm wired and try to tune in on some up tapped muse..

Which are your music influences?? Hum.. hard one.. so many great artist's to say but to name a few I dig organic stuff like Old James Taylor and Billy Joel.. The always lauded Beatles and the  classical pianist's I've always tapped for inspiration.I dig Cobra Starship and Jason Reeves and just to many more to mention!

What plans do you have for the future?? I'm a day by day by week kinda person I let things happen through divine plan and trust a lot in hard work and good friends..  I've got a new album coming out in October "Honest Love so go out and grab it or give it a download!

Which has been the funniest prank you have been or took part while on tour or after a show?? I was out in California a few years back even before any one even heard of me and my drummer called one of the top LA venues on a friday night and pretended to be some big shot booking agent from London and convinced the owner of the club to let us play that night.. We acted like we were from Sweden  and didn't talk to anyone..We had NO equipment and we used the headliners gear.. We went over so well the owner asked if we could come back..

If you were stranded in the middle of nowhere after a show or while on tour. The help is 65 miles away from where you and your band (If any) are, ¿Who would you send to look for help? And if while the rest wait, there's no food and the only way to feed yourself is by eating each other, ¿Who would you eat first? I would eat the bus driver because he got us into this mess Rafa and he looks to be well fed so my fork and knife are aimed at bus boy.. I'd then use the bicycle I bring with me that's stored under the bus to ride to safety:)

Which country you would love to play? England..

With which bands you would love to share stage?? Jason Mraz would be fun..

Are you OK, with the direction the band is going actually? Yes!  Thanks Rafa and Vents for this interview!