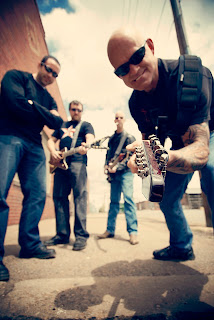 What's the meaning behind the band's name? Core Zero is actually a medical call (for emergency service folks) of a dead body. Usually of natural causes but not always!
How the band started?? The band started with three life long friends, 2 of them brothers. I became involved after placing an add on Music Mates.com advertising myself as a singer. I had just finished a project as a singer for hire for a Christian act in Denver called Arrival. Mike (bass player aka jughead-cause he looks like the archies character in the comics) called me up and I auditioned with a friend who was a guitar player. I stayed with the band and over the course of two years the original drummer and guitar player left the band due to personal issues. We picked up Dave as our new drummer – he was classically trained but hadn’t played in about 10 years. He was and is awesome. I started playing guitar to fill and and we hired Greg as the lead guitar player. That is our current line up and it has been stable for almost two years and we do not anticipate any changes at this point.
What's the message to transmit with your music??
The main message is straight up hard rock and metal. As for lyrical content I pull from life experiences, a little bit of politics (but that is not our focus) and we are working on perhaps some humorous content as well.
What's your method at the time of writting a song??
We have used various methods. No one person takes credit for a song we decided that all credit would be shared equally as we all collaborate together. We have had members come in with a song completely written to just jamming through a riff or two and then piecing a song together from scratch that way. Sometimes my lyrics are written in advance and placed into a framework, other times I try to spontaneously write while listening to the other members write and work with tunes and let the music feel inspire me lyrically.

Which is your music influences??
Our influences are many…I am an 80s hairband metal child who now listens to anything from hard rock to screamcore metal like lamb of god and killswitch engage. Greg came from a blues background, Dave came from a classical background but really enjoys “math metal” and Mike played in some late 80s bands but likes most rock and blues styles.
What plans do you guys have for the future??
The band started as a hobby but as we developed we are starting to look to the next level. We really enjoy the friendships in the band and the music that we are able to make together. In the future we would all enjoy the opportunity to quit our day jobs and become full time performing/recording musicians. Currently we are focusing on marketing – we are happy with our product and just need to get some name recognition now.

Which has been the funniest prank you guys have been or took part while on tour or after a show?? During the recording of Doxology we came up with a phrase that described a certain sexual act that we decided Greg would like to try. We then integrated that phrase into several placing during the recording and would wait for Greg to hear it and then pitch a fit. In one instance the phrase made it all the way to the final mix before Steve our co producer and engineer finally picked up on it and then isolated it for Greg to hear….it was promptly deleted and we have been forbidden to discuss it ever again!
If you guys were stranded in the middle of nowhere after a show or while on tour. The help is 65 miles away from where you guys are, ¿Who would you guys send to look for help? And if while the rest wait, there's no food and the only way to feed yourself is by eating each other, ¿Who would you eat first? Dave has a military background so we figure we’d send him out with a compass….if he decided he was hungry I figure he’d come back and kill us off one by one in a very stealthy manner hahahaha…
Which country you guys would love to play?
I personally would love to play in the UK…..also Asia or South America as they both love American Metal. Of course playing here in the US is the first priority.
With which bands you guys would love to share stage?? We would love to share the stage with many acts….Disturbed, Godsmack, Drowning Pool, Sevendust, Killswitch Engage etc.
Are you guys OK, with the direction the band is going actually?
We are happy where we are headed for now…..we would like to see an increase in sales for the new album Doxology so we could focus more funds into promotions for the band.