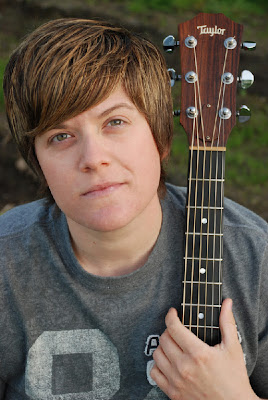 How did you get started with all this??
I have been performing for almost 20 years.  I started out playing bass and singing back up at age 16 in an indie alt/rock band called The Everyday Visuals that was based out of NH.  We performed together for about ten years until I decided to venture out on my own to start my solo career.  Throughout the time we played together, we performed at many places in the Boston area such as The Hard Rock Cafe, TT the Bears, The Lizard Lounge, The Middle East, and The Paradise Theater.  I am so thankful that my career started out with the band because I was able to learn so much about the music industry.  I also was able to work with many musicians which allowed me to open up to new ideas for songwriting.  We recorded 3 albums together and played all over the northeast.  I left the band about 4-5 years ago and have been maintining an independent solo career playing all over the northeast sharing the stage with national artists such as Melissa Ferrick, Howie Day, Blessed Union of Souls, Pamela Means, Edie Carey, Chris Pureka, and Ember Swift.

What's the message you want to transmit with your music??
The purpose of my music is to send a message of peace and that life is a beautiful gift.  I write many of my songs about nature (being from NH and all I have hiked many of the 4,000 footers up north in the White Mountains) and also about how we as a human race need to get along and work together in order for the world to find peace.  For en example, I sponser a child in Uganda.  I write letters to her every couple of months or so and she sends letters back to me.  We talk about our countries and educate eachother on how life is for us.  I like to learn from her and she has expressed that she likes to learn from me.  Her enthusiasm and hope is something that I will neve overlook or take for granted.  It amazes me how she can be so hopeful with the little that she has.  I suppose the saying, "I don't need anything that I don't have" is perfectly true...and like the Beatles say,  "all you need is love".  One of the songs that is on my latest EP entitled "What's My Secret", is about going to visit her and how if everyone could just gather around and believe in one another and envision peace throughout the world, we would all be happy and willing to help eachother out - I beleive that is the reason we are here...to help one another out.

What's your method at the time of writing a song??
Many times I write the music and words together but often times I write the lyrcis and then a month or so later the music will come and the melody will fit the lyrics I wrote previously perfectly.  I love it when it works out like that...it's an awesome feeling.

Which is your music influences??
John Denver, Ani Difranco, Donovan, Simon and Garfunkel, The Indigo Girls, Joni Mitchell, and David Gray.  There are many more but way too many to list!

What plans do you have for the future??
To perform and tour full time with a new record within 1.5 years.  I am currently working very hard with my partner trying to book throughout the northeast.  I am also working on a new full length record that I am hopeful will be out by early summer of next year.

Which has been the funniest prank you have been or took part while on tour or after a show??
Hmmm...funniest prank?  I am not quite sure...I know the guys in my band were always giving me a hard time...we were kind of like brothers and sisiters - we loved to joke around with eachother!

If you were stranded in the middle of nowhere after a show or while on tour. The help is 65 miles away from where you and your band (If any) are, ¿Who would you send to look for help? And if while the rest wait, there's no food and the only way to feed yourself is by eating each other, ¿Who would you eat first?
Well there is no band because I tour solo so I guess I would have to go and find help myself and hopefully find something to eat along that way!

With which bands you would love to share stage??
The Indigo Girls!

Are you OK, with the direction the band is going actually?
Yes I am...I am working very hard on setting up a tour.
Check out more: http://www.andreapaquin.com
Publicado por Vents en 9:34