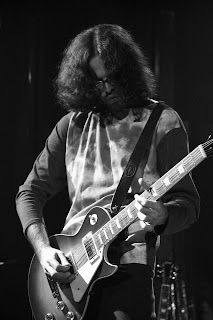 How did you get started with all this??
I was hooked by rock-music when I was 14 years old. It started with discovering the Beatles. And that was unusual for a teenager to be a fan of the Fab Four in the mid of 90’s. All my peers listened to Nirvana, Metallica or Sepulture. But I was awed by unbelievable melodies of the famous British band. I bought my first guitar, started to learn chords of my favorite Beatles songs and of course began to compose my own ones.
The amount of composed staff gradually was evolving into quality. I plunged deeper in music theory, which helped me a lot. In the same time I got acquainted with works of other great rock musicians… Not only musicians but outstanding guitarists or I would say instrumentalists as well - Jimi Hendrix, Led Zeppelin, Deep Purple, Jeff Beck, ZZ Top, SRV. So I started to learn licks, scales, patterns – all those guitar gimmicks.
And my bad vocal prompted me to compose more of instrumental music, which is a really different world or language comparing to song composing. It’s a quite challenging task to hold listeners attention only by music, not words. That caused me to study works of classical composers – just to get new perspective about instrumental music. I took one-year piano course just to widen my view of composing. And that opened new music horizons for me.
What's the message to transmit with your music??
I do put a certain message into my works. But I like to keep it hidden and to-be-discovered, as famous writers and composers did. I leave little symbols and hints to guide a listener. But it is his job to make the find in accordance with his/her inner world. Although, if he\she is not up to any search, a mere enjoyable music is always at the surface.
What's your method at the time of writing a song??
Since I compose guitar instrumentals – usually it all starts with a riff or an interesting phrase. I continue to mess up with it, building something more whole, what I can call a verse or a chorus or a bridge or an intro. I write down these pieces and use them in later for a certain composition. But in general it’s all about elusive inspiration. Sometimes I listen to my music and think – “I don’t believe I composed that!”
Which is your music influences??
Though I was influenced by many musicians like The Beatles, Jimi Hendrix, Deep Purple, Stevie Ray Vaughan, Jeff Beck, ZZ Top, however the most impact I got from famous Led Zeppelin and my style originates somewhere there. So I bet – Zep fans will like my music.
What plans do you have for the future??
I know that it’s my calling to compose and play music. So far it’s a hobby, but I see as it’s drawing me more and more up to the professional level. It would be super great if one day I can do it for living. This is what I dream of – my favorite occupation becomes my job.
Which has been the funniest prank you have been or took part while on tour or after a show??
Nooo… pranks are not for me. I like to keep things safe and people happy!


If you were stranded in the middle of nowhere after a show or while on tour. The help is 65 miles away from where you and your band (If any) are; who would you send to look for help? And if while the rest wait, there's no food and the only way to feed yourself is by eating each other, who would you eat first?
Oh man – it’s a huge dilemma for a one-man-band! To send myself for help or to eat myself as well later? Hmmm…
Which country you would love to play?
United States of course. It’s a country with a vast musical subculture, treating well the performers of different genres.


With which bands you would love to share stage??
Led Zeppelin and Jeff Beck – but I better would sit in the audience and enjoy the show.


Are you OK, with the direction the band is going actually?
I wouldn’t judge it in terms of “OK or not OK”. My music “career” is evolving gradually, slow but steady. Even 5-7 years ago I wouldn’t have imagined anything of what I have achieved for the present. I’m looking forward to see what is waiting for me around the bend.
Check out more: www.olmerk.com
Publicado por Vents en 10:59