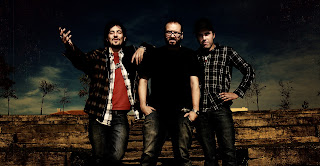 What's the meaning behind the band's name?
It,s about the main evil character of one of hellboy,s books. The title is "wake the devil" and the bastard is a prussian hussar that,s still alive in the 21th century. Black Horde was the nickname of these ancient warriors, the brunswickers. I,m a big fan of military history and comics, so I decided to make a band with that name. How the band started??
In a small room with me and the bass player working in the same company. He was a local well known bass player thinking about moving away from music. I managed to take him from the dark side of boring works and social networks and we began to rehearse some songs that I had in my PC. After the first drummer leaved the band we began to test some new guys. One of them crashed his car after making a quite good try so we decided that we couldn,t let pass that signal. So let there be  the power trio of modern rock.What's the message to transmit with your music??
Just have fun with our music. If you like it we will like you. If you don,t like it we will like you too. We are good guys after all. I make the lyrics and music, and what I can tell you is what the lyrics doesn,t talk about. They don,t talk about the rock way of life of some crap like that. Or about live fast and die young. We will like to grow old and be happy if it,s possible. Many of the lyrics are connected to santeria and other mystic things that I like so much. One of my biggest influences is the 80,s-90,s bluesman John Campbell. That guy was serious stuff.What's your method at the time of writting a song??
Well I,m thinking in music 3/4 parts of the day. The rest usually I,m sleeping . It all begins when I,m walking in the street and I realize that I,m singing a quite interesting melody. After that I record the idea in my iphone (that,s why I,m thinking in calling a new song or band "God Phone"). Then some sort of story that fits with the song appears in the form of a short sentence. Something like "rather young man".............Then at my home with the guitar I begin to make the entire song with the melody. When I go to a rehearsal with the band the main skeleton is made, so the work is much lighter than spending 3 hours of jamming to obtain something. Which is your music influences??
Blues.......delta blues, acoustic blues. Classic rock and modern rock bands. I think that the 90,s is full of great bands whith something new to say. I like soundgarden, Alice in chains, Nirvana...........and allways the blues. The classics and of course John Campbell again. It,s one of my favorite guitar players with Hendrix and Billy Gibbons. John Frusciante is the other guy I like to hear playing the guitar. The bass player is a melodic hardcore fan, of bands like face to face, alkaline trio and NOFX. The mixture of both influences is weird but cool.What plans do you guys have for the future??
No plans. Just making music and playing. We would like to play outside Spain, where english is not a foreign language...........by now it,s difficult. But not impossible. And remember that in 2012 is the end of everything.......... Which has been the funniest prank you guys have been or took part while on tour or after a show?? I remember so many.............trying to shut down the power in a turbonegro show was risky. The Norwegian guys of the backline were too big. But they were very understanding with me. The bass player is the king of these bad ideas. You know, we like to drink sometimes, but nothing excessive.


If you guys were stranded in the middle of nowhere after a show or while on tour. The help is 65 miles away from where you guys are, ¿Who would you guys send to look for help? And if while the rest wait, there's no food and the only way to feed yourself is by eating each other, ¿Who would you eat first?
That,s one of the best questions I,ve ever read........and here,s the answer. If we were on tour there must be some driver that is not a member of the band. So the food question is solved. And to look for help we will send the drummer. It,s the youngest and thinner of the band. Of course he will carry a bag with some driver steaks. And some water. 65 miles running must be a hell of a thing.Which country you guys would love to play?
Tahiti, her women  have had a reputation for a willingness to share their amorous favors with foreigners.  At least that,s what wikipedia says about them With which bands you guys would love to share stage??
There are many bands I love............but I don,t know if I love their members! To share stage with a bunch of idiots could be difficult. For their music I will like to play with Queens of the stone age, Motörhead, Morphine (difficult today), Primus, Foo fighters, Alkaline trio, NOFX, Dropkick Murphys (I think these guys are the real fun), Ted nugent...............Are you guys OK, with the direction the band is going actually?
Sure! We are tired of the retro 70,s rock style. In the 70,s the bands played the 30,s stuff? Remember to hear us on myspace http://www.myspace.com/blackhorderock
Publicado por Vents en 12:14