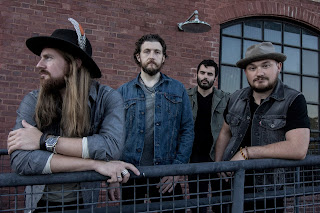 What's the meaning behind the band's name?
The name Stolen Rhodes comes from the combination of two stories involving the "acquiring" of a Fender Rhodes keyboard. The first involves our singer/guitarist Matt Pillion. He was working with a band out of Pennsylvania at a time and let a friend of his borrow his Fender Rhodes keyboard, a keyboard which Matt never got back. The second involves our bands first drummer Jon Grill. We both had heard of a Fender Rhodes that was going to never be put to use at a high school in New Jersey, so the important people at the school turned their head as he took the Rhodes away. Hence the name Stolen Rhodes

How the band started??
Pillion and bassist/guitarist Dan Haase are the two founding members of the band. They along with Grill actually jammed for the first time in high school as all three are from Lakewood, NJ. They just played backyard BBQ's in the summer of 2000. It was only a one summer thing though as Matt went off to school and he started his own project out in Lancaster, PA. It wasn't until Matt's wedding in September 2007 that we played together again, at the urging of his new wife Randi. Nothing came of it at the time as Dan was living in Boston at the time. It wasn't until Dan moved back to New Jersey later that year that the three of us started playing together again. In February of 2008 we decided that Stolen Rhodes needed to form officially. Guitarist Kevin Cunningham joined the group about a year later, when we decided we wanted a full time lead guitarist, as Matt also plays keys and sax in the band. Grill left the band in October of 2009 and was replaced by Ian Petri. Petri left the group in June of 2010 and as of now the drummer we are working with is in the tryout phase of the band.

What's the message to transmit with your music??
What we really look to transmit is that kick ass straight ahead rock and roll music can still be appreciated by people. We want to show that people can still be enticed by a great guitar riff or great guitar solo. We want people to be able to listen to lyrics in our songs and equate the lyrics to their lives. All of our songs tell a story. Whether it is a story that directly affects our lives, or whether it is a brief 3-5 minute synopsis of what were observe in the world. The point is everything is real and from the heart, and as we grow in popularity it is nice to see that people still appreciate just down home kick ass rock and roll. If we could portray that to the masses, it would be amazing.

What's your method at the time of writing a song??
Well all three of us write, and all three of us write in a different way. Sometimes we write as a group, and sometimes we write individually and bring it to the group. It depends on the situation. When Matt writes he usually he has all his lyrics ready to go, and his chord progressions ready to go. At that point he'll bring it to the band and Kevin will usually come up with a guitar riff of some sorts, and then fill in guitar solos where need be. Kevin's method of writing songs is what usually leads to the most group writing. Kevin will come in with an idea (usually a guitar riff) and from there the three of them will run with writing the rest of the song. Dan's songs are usually all but finished when he brings them to the band, save a few arrangement and fill ideas that Kevin or Matt would suggest. Dan is very much more exact with the songs he writes and they usually don't get much work from the product that Dan brought in.

Which are your music influences??
The three of us are all huge Bruce Springsteen nuts. He pretty much does what we want to do. Real rock and roll music, with lyrics that speak to you, and the most amazing live show you will ever see. The three of us are also bug Zeppelin fans; their influence though doesn't shine through as much as the Springsteen influence though. The three of us are also big into country and southern rock, and that is an influence you can hear in a lot of our tunes. We are all big Allman Brothers, Eagles, and Skynyrd fans, and we use a lot of their influence in our writing. We're also big fans of some of the modern guys such as Brad Paisley, and Dierks Bentley. Individually, Kevin's guitar influences are Stevie Ray Vaughan, Jimi Hendrix, and Mike McCready of Pearl Jam. Dan's bass influences are James Jamerson (of Motown fame), Paul McCartney, John Paul Jones, and John Entwistle. Matt's vocal and guitar influences are The Band, Jackson Browne, and Duane Allman.

What plans do you guys have for the future??
We want to be able to make a living solely from playing our music. We don't have to accomplish world domination to the degree that a band like the Rolling Stones has achieved it (though we wouldn't be opposed to it either) but just to be able to make a comfortable living playing our music. Obviously the sky will always be the limit for us, but we see a band like the Old 97's who play nothing but bigger clubs, yet they are very happy, and very successful, and have been doing it for 20 years. They have also required a very loyal fan base while doing it. In the immediate future, once we officially hire a drummer, we are going to head into the studio to record and eventually release our first full length CD. We would also like to explore playing in other parts of the country in the next year. We have already branched out successfully to the South, and hopefully we can go even further south and then bring the music west.

Which has been the funniest prank you guys have been or took part while on tour or after a show??
There was one show in Philly where a friend of mine had come, and they had the same car as Matt. Well Kevin, and I (along with my friend) thought it would be funny to switch the keys of Matt's car with my buddies. Well Matt comes in all pissed off because he can't open the door to his car. He's sitting trying to think how this could be mathematically possible (as Matt is very good at math), meanwhile we're sitting in the corner cracking up, as Matt is just in this terrible place because he can't load his stuff into his car. Eventually, when he was about to break the window of his car in, we told him what we did...we should have let him bust the window in.

If you guys were stranded in the middle of nowhere after a show or while on tour. The help is 65 miles away from where you guys are. Who would you guys send to look for help? And if while the rest wait, there's no food and the only way to feed yourself is by eating each other, Who would you eat first?
No one. First off I can hold off for 65 miles. Dan watches way too much Man vs. Wild, so Bear has taught him exactly what to do in this situation. Matt would have to be spared because he can probably build a rocket ship out of guitar and amp wires and launch us to safety. Dan usually carries a knife everywhere he goes, so he would probably just kill a squirrel for food, upon which we would cook on the stove that Matt made out of guitar amp speakers. Kevin would probably be the first to think of a logical solution. He would use his blackberry (which he is attached too) and get the right GPS coordinates so Matt can shoot the rocket ship in the right direction. We are not scared of the wild, the wild is scared of us.

Which country you guys would love to play?
Germany, Ireland, or England. They still love good music over there, and there is a lot of beer to be drunk in both of those countries.

With which bands you guys would love to share stage??
Bruce, what a legend.

Are you guys OK, with the direction the band is going actually?
Besides the fact that we have a hard time keeping a drummer in the band (both our drummers left for personal reasons and we are on good terms with both of them), yes. We play bigger and bigger gigs, and people enjoy us more and more by the show. We can't complain.