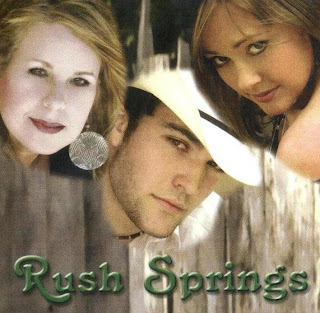 What's the meaning behind the band's name? Our drummer, Walton McMurry was competing in a high school marching band contest against a town called Rush Springs. Walton said if he was ever in a band he wanted to name the band Rush Springs. Due to the fact Walton thought the town name Rush Springs was cool he brought it up in a band meeting and the rest is history. There you go. Walton our drummer named our band Rush Springs.

How the band started?? The band Rush Springs was actually started by Lead Vocalist Beckie Spradling and myself bass guitarist Wenona "Nonie" Taliaferro. After a period of time I (Nonie) introduced Lead Vocalist Beckie to my son Thomas they married and Beckie became my Daughter in law. Around that same time my daughter Lindsey was engaged to a young man by the name of Walton McMurry who just happened to be a drummer. Beckie and I invited Walton to join the band. Rowdy McKinley Lead Guitarist a long time friend of mine as well as a band mate from other bands in the past was just a good fit for us. "The Rowdy 1"as we call him just came with the package.

What's the message to transmit with your music?? We want to create music that will touch peoples lives. You know that song that brings a tear to your eye. That song that makes you laugh, that patriotic song. The music that makes you feel something when you hear it. Makes you want to get up and dance or maybe just a easy listening song you can relate to.
What's your method at the time of writing a song?? Beckie and I are the writing force behind the band. We write all different ways. I might have a great hook line we build around or Beckie might bring a great melody to the table. I grab my guitar and beckie brings her keyboard we just let the music flow. There's times a song will come together very quickly other times it might take us 2 years to finish a song. After Beckie and I have a rough cut version of the song we then take it to Rowdy and Walton. Rowdy and Walton apply their amazing music abilities to the song and there you go.

Which are your music influences?? We have a wide range of musical influences. Beckie and I have the pretty much the same influences Rebe McEntire, Emmy Lou Harris, The Judd's, Tanya Tucker, George Strait, Brooks & Dunn, Merle Haggard. Walton's influences consist of Phillip Glass, Buddy Rich, Ed Soph, Stan Kenton, JoJo Mayer. Rowdy's influences are
Brad Pasley, Keith Urban, Eric Clapton, Jeff Beck, and Ritchie Blackmore. Rowdy named his son Ritchie after his idol Ritchie Blackmore.
What plans do you guys have for the future??  Build a great relationship with our fan base. We just want to get better and better at our craft. Working toward that major record deal, writing and recording our original music. Book as many gigs for 2011 as possible. We would love to book a USO Tour. Last but not least we are so excited about the release of our 2nd EP scheduled for the Spring of 2011.

Which has been the funniest prank you guys have been or took part while on tour or after a show?? I would have to say the funniest thing that happened on tour was back in the day when we drove an old beat up motor home. We played a gig at a casino in Oklahoma. When we entered the beautiful fancy venue security came running out searched our motor-home. They thought we were terrorist. lol Talk about a shocker. We have better transportation now.

If you guys were stranded in the middle of nowhere after a show or while on tour. The help is 65 miles away from where you guys are, ¿Who would you guys send to look for help? And if while the rest wait, there's no food and the only way to feed yourself is by eating each other, ¿Who would you eat first?
We would most definitely send our muscled up hottie drummer Walton McMurry 1st. Walton is in the best shape to make it 65 miles. We would eat Rowdy our lead guitarist because he's a little guy I think Beckie and I could take him. (laughing)


Which country you guys would love to play? Australia would be nice I've heard is absolutely beautiful down there however we would love the opportunity to play any country our United States Armed Forces are based. Such as Iraq, Afghanistan, Japan ect.. We would be honored to play a USO Tour. Maybe someday soon.

With which bands you guys would love to share stage??  Lady Antebellum,  Heart,  Alabama, Van Halen.

Are you guys OK, with the direction the band is going actually? Yes, we have came along way. Our Drummer was at one time engaged to my daughter we went through the trials of a break up and still stand strong. My son Sergeant Thomas Spradling USMC who is married to our lead vocalist Beckie has survived 2 tours in Iraq and 1 tour in Afghanistan and were still standing strong. My Father had a stroke Christmas Day 2009 right in front of the entire family what a horrible day. By the grace of God he survived. We had a tornado rip through our little town of Lone Grove, Oklahoma. My parents house took a direct hit destroyed the house with them in it as well as my daughter, husband and unborn child. They all survived. All through these trails and tribulations we have stood by each other. We know when one of us is down and out we can count on the other band members to be there when we need them the most. Encouraging one another to keep on pushing. Never give up on your dreams. As for as goals we never stop were always pushing for that major record deal or that hit song as a song writer. The only losers in life is those who do not try.
Check out more: http://www.myspace.com/rushsprings
Publicado por Vents en 13:43