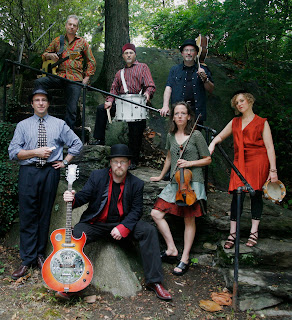 What's the meaning behind the band's name?
Spuyten Duyvil takes it's name from a bit of fake history promulgated by Washington Irving in his Knickerbocker's History of New York. In this tall tale, Peter Stuyvesant's bold besotted squire Anthony Corlear drowns at the hand of the Devil while attempting to swim the East River in a quest to defend the Dutch settlement from British aggression. The phrase is bastardized Dutch and has been interpreted alternately as Spinning Devil, Spitting Devil, or the band's choice, In Spite of the Devil. It also names the southwestern tip of the Bronx, overlooking Manhattan's Inwood Park, where an eponymous creek used to flow.
How the band started??
I was a video game composer in California in the nineties. It was high speed, high volume, low art and I got burned out and stopped making music. A few years later, my wife (and now lead singer) Beth took a flyer and bought me a bouzouki for my birthday. I needed to find some easy music to re-learn how to play and I found what I was looking for in old timey, roots and gospel music. I was fortunate enough to live in a cool neighborhood populated by musicians and artists and to be married to a great vocalist, so we just started hanging out on our front porch, pickin', drinking beer and eating bbq... When you play music with people you really enjoy as people, it's pretty easy to get the band thing rolling...
What's the message to transmit with your music??
I write two kinds of songs... High energy barn burners to get the energy up and celebrate the live performance experience and character driven story songs that find hard won hope and joy beneath the weight of our broken world.
Underneath both type of songs lies my belief that there are many truths in this world and that claiming to own 'the big truth' and derive power over others from it is the source of most of the misery in our time... Every person has their own unique experience and I try to find these 'little truths' and use them to create stories that people can relate to. I also believe that, through history, very little of substance about the human condition has really changed. Is AIDS worse that the Plague? Is burning fossil fuel from the ground worse than slaughtering whales for oil or, worse still, living in the dark and cold of the middle ages? Our experience in this world is highly subjective and we can either love or hate it, celebrate it or slit our wrists, it's all what we make of it...
What's your method at the time of writting a song??
I usually set my songs in previous periods of history to make them less autobiographical, less topical and hopefully more universal. I always start with an idea (i.e. throughout modern history, many young people end up going to war because they lack alternate economic opportunity rather than out of patriotism or agreement with the acts of their government), find a character that I can empathize with and start speaking in their voice... Their language and speech patterns have inherent rhythm and pitch that follows the meaning. This generates melodies (kind of like autotune...). Once I can sing the whole song, I'll pick up an instrument to find the harmonies implied by the melody...
Which is your music influences??
For my writing, I listen to a lot of Piedmont style guitar players like Mississippi John Hurt, Rev. Gary Davis, and John Cephas. I listen to old recordings of jug and string band and medicine show music, the Carter family, Studio One era Reggae, and the Blind Boys of Alabama. That said, I picked up a copy of the Beastie Boys Paul's Boutique from a street vendor last week. It's equally awesome and useful for me as a writer.
What plans do you guys have for the future??
We have just started working on our first full length CD. The CD will showcase a more blue/gospel/roots sound than what we have had in the past. The working title is 'New Amsterdam' and will showcase a series
of songs about the Dutch Colony that preceded New York. It is an often overlooked but critical period in our history. From what I have read, it seems that the fundamental American notion of the separation of
church and state came from the early Dutch settlers. (It sure as hell did not come from the Pilgrims). I'm a bit obsessed really...

Outside of that, we will continue to focus on playing local festivals, fairs, farmer's markets, and listening rooms...
Which has been the funniest prank you guys have been or took part while on tour or after a show??
We are actually too well mannered for this question...One of the reasons we are able to keep a seven piece band together is that we are pretty nice to one another...
If you guys were stranded in the middle of nowhere after a show or while on tour. The help is 65 miles away from where you guys are, ¿Who would you guys send to look for help?
Jim, our harmonica player. He climbs mountains, rides bikes 100 miles or fun, and is incredibly smart (he is the editor of Popular Mechanics...) and utterly reliable. He has traveled the world and can drive a car and play harp at the same time.
And if while the rest wait, there's no food and the only way to feed yourself is by eating each other, ¿Who would you eat first?
From Tom, our guitar player "Were we to resort to cannibalism, I would
be the first to go. My body is perfect; like veal."
From John, the bass player: "Not sure who we'd send but please save a drumstick for me."
Which country you guys would love to play?
When I was in college, I backpacked though Amsterdam, Belgium, and Italy playing music in the streets. I would love to take this band back and travel the same route.
With which bands you guys would love to share stage??
I would love to play the same stage as the Wood Brothers, the Duhks, or Dawes.
Are you guys OK, with the direction the band is going actually?Things really could not be better for us right now. We are very happy playing locally. fortunately, we live right outside of New York City so there is a tremendous amount we can do without leaving home. We are really excited to be back in the studio. Our recent festival appearances have interested some of the more influential local folk DJs so the pump should be totally primed for our CD when it is ready for release...
Check out more: www.spuytenduyvilmusic.com
Publicado por Vents en 7:09