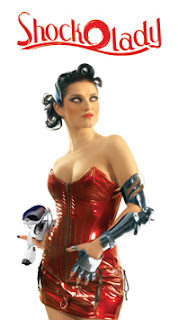 How did you started with all this??
Based in St Petersburg, I started my stage career as a dancer, trained in jazz, modern, r’n’b and break dance. After a horrible injury I stopped dancing. But I had a dream – be on stage! So I moved on to singing jazz standards, reworking them to give a contemporary edge. I performed at numerous jazz festivals and charity events across Russia.
Focusing on writing my own material, I began collaborating with up-and- coming Russian record producer and arranger Kolya Bichan. In 2010 we finished our work on my debut album What’s the F..Fashion?
What's the message to transmit with your music??
I create music that unites POWER POP, ROCK and GLAM.
This music reflects my individuality: extravagant, outrageous and sensual at the same time with the innovative approach of NEW WAVE style in music and outlook. Each time I create new elements of the show to excite the audience. This is a music for strong and sexy women and guys with bolls.
What's your method at the time of writing a song??
I’m trying to express all my feelings in my music. I think it’s very important to be honest when you are writing a song, cause if you lie – your fans will feel it.
Also it’s very important to be honest even if somebody wouldn’t like it. In my point of view music could be written about love, sex, relationship or other beautiful feelings and some political or social problems as well.
Once again honesty is a key for success, cause fans deserve to listen to the true music.
What are your music influences??
There’re a lot of: U2, Prodigy, Michael Jackson, Christina Aguilera, Freddy Mercury, MADONNA, Pink, Garbage, Franz Ferdinand, Led Zep, Billy Idol, Ella Fitzgerald, Elton John, Ozzy Osbourne, The Beatles, Rolling Stones, Aerosmith, Depeche Mode, Rammstein
What plans do you have for the future??
I’ll have release of my album at 25th of October in London. And after that the support tour through the UK. Also we plan to shoot a video on my first single “What’s the F…Fashion?” and make some cool photo sessions.
If you were stranded in the middle of nowhere after a show or while on tour. The help is 65 miles away from where you and your band (If any) are, ¿Who would you send to look for help?
I always travel with my small dog (aibo). I’ll send it.
And if while the rest wait, there's no food and the only way to feed yourself is by eating each other, ¿Who would you eat first?
I don’t have a band, I prefer to make showcases alone or with dancers. But I love my team, so I’m not gonna eat them. I think me & girls (dancers) will seduce some guy & then eat him))
Which country you would love to play?
I really love to perform in UK, USA and EU, cause people are very opened minded there for some new trends. But I would also like to perform in Japan, China or Australia cause they have absolutely different culture and it would be interesting to feel their reaction!
With which bands you would love to share stage??
Well… it might be Pink! Also it could be exciting to perform with Marilyn Manson, U2))
Are you OK, with the direction the band is going actually?
I’m absolutely sure that we will rock this  world!
Check out more: www.shockolady.com
Publicado por Vents en 13:54