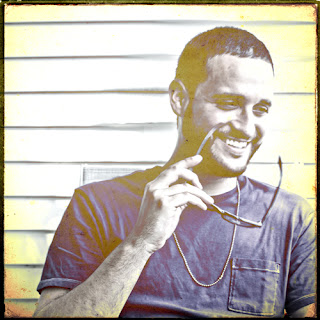 What's the meaning behind the band's name? I was having a hard time coming up with a name so I just ran with what the concept was for the record in the first place. Myself and my friends ha, so that's what we called it. Mike Golden & Friends. How the band started?? In my apartment at college, using anything i could find to make a song with, along with my acoustic guitar. Then when I got enough songs, i went back to Chicago to see what I could do with them, and here we are. What's the message to transmit with your music?? I just want to transmit good vibes. a energy in music that makes one feel the words that the song is projecting. Music has always been able to turn my mood from one song to the next. Make me really wanna go through what that song is emitting. So I would love to make people feel about my music how I certain music i like makes me feel. What's your method at the time of writting a song?? It just really depends. It kinda happens when it happens. With a guitar riff, or a vocal melody, a batch of lyrics ill have for weeks that i finally get some music for. Wherever I am at i always am able to write down or record an idea because of my phone so that helps a lot, but lately i've been trying to just go with it, no writing, just in the moment whatever feels right to me. Which is your music influences?? ha I really do have too many. Led Zeppelin, The Beatles, Brand New, Joe Cocker, James Brown, The Doors, Jay-z, the list could go on and on.What plans do you guys have for the future?? More music, hopefully for FREE, and just an onslaught of shows, repeated with more and more music. Which has been the funniest prank you guys have been or took part while on tour or after a show?? Prolly the time we Blew off some fireworks at eachother in some random parking lot and got bitched at for it by the cops. I mean it was like August. If you guys were stranded in the middle of nowhere after a show or while on tour. The help is 65 miles away from where you guys are, ¿Who would you guys send to look for help? And if while the rest wait, there's no food and the only way to feed yourself is by eating each other, ¿Who would you eat first? I would send James, because he could probably call one of his fraternity brothers to come pick him up. haha just kiddin James. Im saying we would most likely eat Andy (manager) because he eats goat meat all the time, so he'd probably taste like a goat which is better then human....(not that i know)...(for real, I don't know!) ha Which country you guys would love to play? I wanna play in the capital of the Netherlands. thatisall.With which bands you guys would love to share stage?? Can we bring back the Beetles from the dead? How about Elvis? haha Hard question. Are you guys OK, with the direction the band is going actually? I am more than OK with the direction the band is going. I can't wait to pick up an electric guitar and see what myself and friends can come up with.
Check out more: http://www.myspace.com/mikegoldenandfriends
Publicado por Vents en 14:05