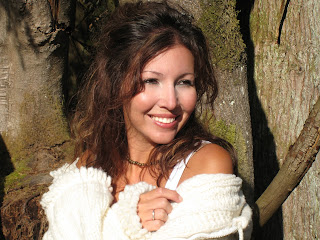 Q1) How did you get started with all this?
A1) Ever since I was very young, I knew that music was deep rooted within me. I was composing instrumentals on piano by age 13 and by age 20 I had already toured Canada for a year with a gospel band as a bass player. Although I put music on the back burner in order to start a career in social work, I started writing full force again once I moved from the Prairies to the Sunshine Coast, British Columbia 5 years ago. hmmm...have I just dated myself?
Q2) What's the message you want to transmit with your music??
A2) Writing music has always helped get me through hard experiences in life. If the music I write can help inspire or bring hope to others as well...then that is a bonus for me. It brings me great joy to share my stories with others so they don't feel so alone. Although, I do write some fun songs too...just to keep a good balance! Not too many people know this...but I have a warped......dry.......quirky.......humor...I just have to..it keeps me insane.
Q3) What's your method at the time of writing a song??
A3) hmm...good question. Sometimes I have lyrics that start to pop into my head and I later create the music and mood to go with it. Sometimes the reverse happens where the music comes and I then try to find the words. It all just depends on the day. Also, I write closely with singer/songwriter, Kris Anders. When I am stuck on something, I collaborate with him and vise-versa. Kris and I are a music team, but solo artists as well.
Q4) Which is your music influences??
A4) My influences include Damien Rice, Serena Ryder, and KT Tunstall. Also, when I moved to British Columbia, I was fortunate enough to jam with a bluegrass/folk group called the Dutton Turn Hogs. Thus, my current writing style has sort of a folk/rock fusion thing going on. "giddy up little horsey! woohoo!"
Q5) What plans do you have for the future??
A5) I am very pleased to share that I have just signed with Citation Records out of Los Angeles, California! I'm really looking forward to working with them. I am also close to releasing my first full length album entitled “On The Edge” which is scheduled for release later this Fall. I'm planning a tour in Western Canada and the Pacific Coast of the US to promote the album so I'm getting very excited about that.
Q6) Which has been the funniest prank you have been or took part while on tour or after a show??
A6) The disappearing act! How boring is that! I will come up with something better...now that you have brought the idea to my head...oh yes... "you're a naughty one...saucy Jack".
Q7) If you were stranded in the middle of nowhere after a show or while on tour. The help is 65 miles away from where you and your band (If any) are, who would you send to look for help? And if while the rest wait, there's no food and the only way to feed yourself is by eating each other, who would you eat first?
A7) Ahhaaa ....you too are warped I see! I love it! Okay....well..I would make sure I had my high heels on in case I got “hit on” by a bear. Then we'd chat for awhile...I would charm him with my knowledge and wit...I would say things like..."doesn't my cartilage look so damn good" or, "it puts the lotion on or it gets the hose".....then we'd feast! most likely on me :(
Q8) Which country you would love to play?
A8) hmmmm, let me think...PARIS, France!............did I mention Paris? Ummm..... ya..I think Paris. “Bonjour mon ami, un verre du vin rouge et un peu du fromage?” Translation- “Let's party!”
Q9) With which bands you would love to share stage??
A9) Any of my influences I mentioned above! I've played gigs before where something special happens in the moment with other players on stage. It's hard to describe, or plan for, but anyone who can bring out a bit more in me would be someone I'd like to share a stage with!
Q 10) Are you OK, with the direction the band is going actually?
A 10) Absolutely! I mentioned my music partner Kris Anders. We've worked very hard over the past few years to get to where we are. We feel we're on the verge of something very special with the new album. But beyond that, being able to play regularly and progressing each time is something we love so much that we consider that a success in itself. The upcoming album release is something that I can't wait to share!!!!
Check out more: www.reverbnation.com/deannacartea
Publicado por Vents en 9:55