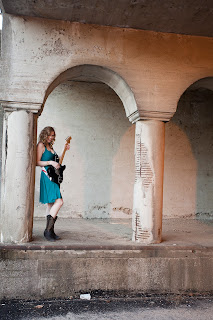 How did you get started with all this??
I wrote and recorded my first song when I was 9 for a school contest. I won first place! But I hid under my desk when my teacher played my song (on tape) for my classmates.

What's the message to transmit with your music??
I want to send a message of hope through my music. Some of the songs I write can be melancholy, but on my upcoming full-length album ("Feel the Sparks"), the majority of the songs are ones that are positive. My songs are all very honest and real, and they are all written about real people and real situations that have occurred in my life.

What's your method at the time of writing a song??
Well, I tend to sit down on my bedroom floor with my acoustic guitar and start playing. Sometimes I'll have a hook or piece of a song stuck in my head and I'll go from there. Then, I tend to hit record on my cell phone, and then start playing & kind of make up lyrics as I go along. Sometimes those end up being the lyrics for the song, but generally I edit it a lot before the finished product is completed.

Which is your music influences??
I grew up listening to James Taylor and Carole King, and then when I taught myself how to play guitar, I learned from playing along with The Who. Right now my biggest influences include Brandi Carlile, Ryan Adams, David Gray, and Tom Petty.

What plans do you have for the future??
I plan to release a full-length album within the next year (entitled "Feel the Sparks"), and I will be moving to Nashville, TN (from Memphis, where I currently live) in January! There are lots of musicians that I have plans to collaborate with and I can't wait to see what will come of that.

Which has been the funniest prank you have been or took part while on tour or after a show??
I haven't really had any pranks pulled on me (yet), but one time a guy accidentally spilled his drink all down my guitar case (it was closed, thankfully) when I was about to play at The Bluebird Cafe in Nashville. My friends say my reaction was funny, but I was super mad at the time, ha!!

If you were stranded in the middle of nowhere after a show or while on tour. The help is 65 miles away from where you and your band (If any) are, ¿Who would you send to look for help? And if while the rest wait, there's no food and the only way to feed yourself is by eating each other, ¿Who would you eat first?
Well if I played a solo show I suppose I would be in trouble, haha!! I'm a vegetarian, so maybe I could live off of dandelions until I figured out how to fix my car!

Which country you would love to play?
I would LOVE to play Wales/The UK, and Canada! I have some super cool friends and fans there. :)

With which bands you would love to share stage??
It would be a dream come true to be able to open for Brandi Carlile or Ryan Adams. I would be so happy it would be ridiculous.

Are you OK, with the direction the band is going actually?
I feel good about the way things are going! I'm going to keep writing songs no matter what, and I hope people continue to enjoy them!